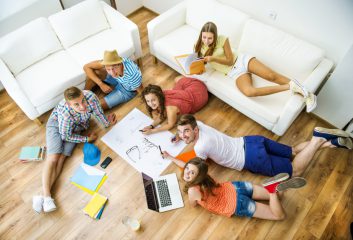 As students around the country prepare to move into new homes in new places, five students in Sheffield will move into the city’s first student housing co-operative.

Their home will have cheap rent, no letting agent fees and no landlord. The founding members of the Sheffield Student Housing Co-operative (SSHC) are pitching the idea as a way for students to escape sky-high costs and make their student house a home.

Housemates in the co-operative will manage the property themselves and pay £69 per week – this is around half the rent charged for some university-run accommodation in Sheffield.

SSHC is part of an expanding co-operative movement, which hopes to tackle the student affordability crisis. In some parts of the country, living costs are exceeding student loans. Housing charity Shelter reveals that half of students are struggling to pay their rent.

According to student housing charity Unipol, student rents increased by 25% between 2010-13, as universities sold off their own low-rent stock and private firms built luxury accommodation. The National Union of Students (NUS) has said that the cost of housing is at a crisis point.

Housing co-operatives, although not a new idea, are still relatively rare. And student versions are even more so.

The Sheffield co-op is only the UK’s third, with similar accommodation in Birmingham and Edinburgh.

The co-op is an incorporated body at Companies House and will control the property for the time that the students live there, who will become members of it.

The housemates are effectively the landlord and tenants, not only living in the property, but also managing it, setting the rent, managing the house’s finances and making democratic decisions about the property’s upkeep. The co-op makes no profit, with the income from rent going towards paying off the mortgage and maintenance costs.

Roy Clutterbuck, James Risner and Rosie Evered founded SSHC with the objective of providing cheaper and improved accommodation than private landlords. The venture began as a dissertation project and has taken three years to become a reality. None of the founding members will be moving into the property as they have all graduated and moved away.

The trio has spent the last year handing over the co-op to housemates who will move into the five-bedroom terrace at the start of the new term. The rent is fairly in line with that charged by private landlords in the area, but there are no other fees to pay. 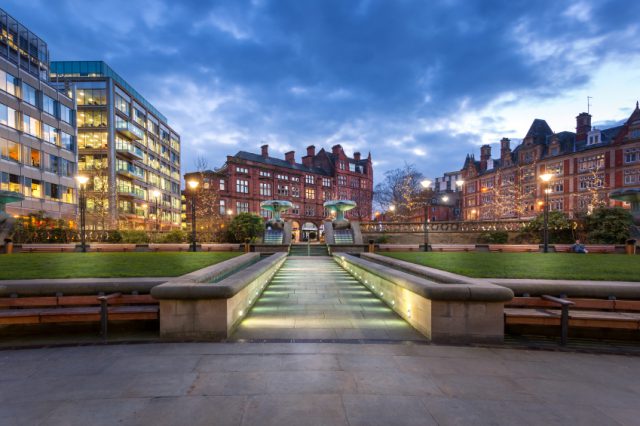 Clutterbuck says: “We are being extremely careful with our estimates and projections.

“The most important thing is to prove that we are financially sustainable, so we are playing it on the safe side by setting extra money aside in anticipation of unexpected costs.”

One of the main benefits of a co-op is the transparency of the finances. The members manage the property’s finances themselves and the long-term plan is for other homes to be purchased later on.

However, the advantages are not just financial. Members have a say in how the property is decorated, furnished and maintained.

SSHC did need help from various groups to get the project kick-started. The body couldn’t get a mortgage itself, so instead, The Phone Co-op, a telecoms firm owned and run by its customers, bought the house and is leasing it to SSHC.

Long-term, SSHC hopes to build up its own financial track record and then purchase the property from The Phone Co-op.

North West Housing Services is assisting with the financial side of property management, although the co-op has full control over spending decisions.

Unlike non-student co-ops, where members often stay for long periods of time, SSHC has built a structure that works for the student members who will only stay for one or two years.

Clutterbuck explains: “The members will have to work closely together to build up information systems to pass onto the next members.

“This means extra work, but is central to our vision. We want the co-op to be specifically for students and we want as many students as possible to take turns living in the house and experience first-hand what communal, democratic, not-for-profit living is like.”1

Typical student accommodation in Sheffield includes university-run self-catering rooms for £96-£136 a week with en suites and up to £155 per week for studio flats. Unite provides halls from £85-£144 a week. Students can also rent from private landlords who charge an average of £65-£75 per week.

Mike Shaw was involved in setting up the Edinburgh Student Housing Co-operative (ESHC) and has been living in one of its houses for the past year.

ESHC took over two neighbouring blocks of student halls, containing 106 bedrooms in 24 flats. A private firm previously ran these. ESHC dropped the rent from £470 to £305 per month including bills. The buildings are leased from a housing association and are completely self-managed with members controlling the finances and conducting a lot of the repairs and maintenance themselves.

Shaw says: “We wanted to demonstrate what student living should be about – affordable, secure and good quality accommodation that is democratic and self-managed.”

ESHC had 40 places available for this year and received 230 applications. These were assessed on a blind basis by a panel. Applicants had to explain what they would bring to and gain from community living.

Shaw continues: “The set-up means we all get to know each other from living and working together, so it’s very social – we also organise events and parties. We aim to build an institutional memory to pass on knowledge about how to run things to new people.”1

A smaller scheme has been running in Birmingham since summer 2014.

Like the SSHC, the Birmingham Student Housing Co-operative (BSHC) has worked alongside The Phone Co-op, which bought an eight-bed house in Selly Oak, on behalf of the BSHC.

All three co-ops are members of Students for Cooperation, a national body formed to develop and support student co-operatives around the UK.

The NUS Vice President for Welfare, Shelly Asquith, states: “It is incredibly positive to see students rejecting the status quo of profit-driven housing in favour of sustainable, mutual and affordable alternatives such as co-ops.”

However, she is cautious about their role as a mainstream alternative to typical student accommodation: “Co-ops can take a significant amount of time and investment to establish, and the number of tenants they are able to accommodate is limited.

“To address the affordability crisis we need to be seeking alternatives to the housing market as a whole.”1

Research from Manor Interiors shows that the cost of renting for a student has increa...