A regeneration project for derelict homes in Liverpool has won the Turner Prize.

The £25,000 contemporary art award was given to the London-based architecture and design group, Assemble, who revived ten properties in the area of Toxteth.

The Turner Prize’s judge, Alistair Hudson, says the collective is “part of a long tradition of art working in society”1.

However, some have questioned whether the scheme should have been eligible for the prize. 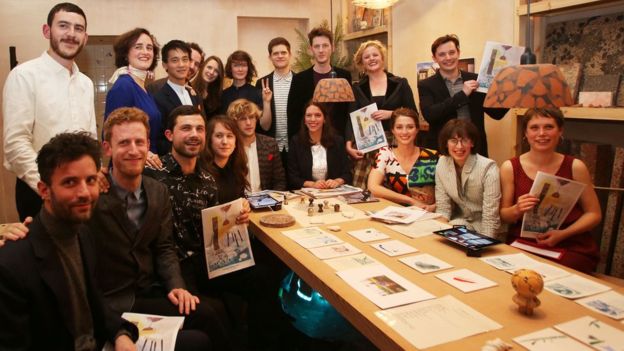 Assemble after winning the Turner Prize

After the announcement on Channel 4, author and broadcaster Muriel Gray said: “I think it’s changed the nature of the Turner Prize, because I don’t think it is modern art. I think it’s socially responsible, beautiful architecture. But it’s a very peculiar year.”1

Assemble includes between 14-18 members, who were joined by Liverpool residents at the ceremony.

The group was a surprise inclusion in this year’s shortlist, but it now joins artists such as Damien Hirst, Grayson Perry and Steve McQueen as a winner of the prestigious prize.

All of the members are in their mid-20s and all but three studied architecture together.

Lewis Jones, a member of the group, described it as “the real antithesis of the conventional model of a Turner Prize nominee being a single genius artist”.

Assemble impressed the judges and Liverpool residents alike by working alongside locals to create unique designs for the interiors of terraced houses in the Granby Four Streets part of Toxteth.

They created mantelpieces from brick and construction waste from the streets; ceramic door handles fired in barbecues fuelled by sawdust left over from building work; and hand-decorated tiles and hand-pressed terracotta lamps.

Jones explains the significance: “Only a few years ago you’d go around and stuck on the front of each house would be a sign saying, ‘All objects of value have been removed from this property.’ So I guess this has been part of putting those things back in.”

The group has also proposed turning one rundown house into a glass-roofed winter garden.

Jones believes that Assemble arrived after “20 or 30 years of cynical, top-down regeneration attempts”1.

Assemble has used the profile of the Turner Prize to set up a social enterprise workshop to make and sell their home improvement objects to the general public.

In the group’s acceptance speech, member Joseph Halligan, said: “I think it’s safe to say this nomination was a surprise to all of us and the last six months have been a super surreal experience.

“But it’s allowed us this amazing opportunity to start something – Granby Workshop – which we hope will live on for a very, very, very long time. We’re really really grateful. Thank you.”1

The Turner Prize was set up in 1984. It is presented to a British artist under the age of 50 for “an outstanding exhibition or other presentation of their work”1 in the previous year.