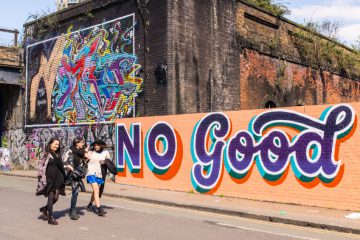 A shared ownership flat has been put on the market for £1m in Hackney, East London, a sign that London is becoming even more unaffordable for aspiring homeowners.

Shared ownership, provided by housing associations, is supposed to help people on low incomes get onto the property ladder by giving them the change to buy a share in a home that they can increase over time.

The buyer then also pays rent on the remainder of the property that is not mortgaged.

However, high house prices in the capital mean that even these affordable homes are too expensive.

The three-bedroom flat, pinpointed by The Guardian, is within a new award-winning development near the trendy Old Street in Hackney. It is priced at £1,025,000 with buyers offered a minimum stake of 25%.

The flat is being sold by Islington and Shoreditch Housing Association (Isha), which says priority will be given to local authority and housing association tenants, Ministry of Defence workers and those that live and work in Hackney. 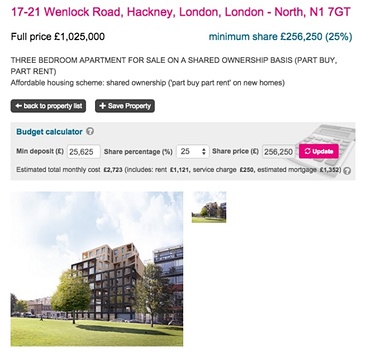 However, Isha estimates that to afford a 70% mortgage on the £256,250 share and have enough money to pay rent on the remaining 75% of the property as well as a monthly service charge, buyers would need a household income large enough to pay out over £2,400 per month in housing costs.

It has been claimed that a large enough loan would not be granted to anyone with household earnings under £77,000 per year. The median salary in the borough is £31,000.

Isha insists that just three of its shared ownership properties are priced above £900,000, all of which are close to the City of London, where homes often have seven-figure prices.

It adds that all three are three-bedroom properties, which means several buyers can purchase together. Another three-bed flat in the development at a similar price is under offer.

Chief Executive of Isha, Clare Thomson, says: “We recognise that the home highlighted by The Guardian is out of reach to many of the households we prioritise to assist.

“It does still, however, meet our objective of assisting people who would otherwise not be able to purchase in that area. The proceeds from shared ownership are invested in providing low-cost rent homes in the same area.”

Developers must provide affordable housing in new projects over a certain size, by working alongside housing associations to create homes at below-market rents and for shared ownership.

Under the regulations, only households earning up to £85,000 in the capital can buy three-bed homes through the scheme.

Deputy Head of Policy at housing charity Shelter, Kate Webb, states: “It is clear that when an affordable flat costs over a million pounds, our housing crisis has plummeted to new depths.

“Shared ownership schemes are there to help people on ordinary incomes get onto the housing ladder, but as house prices soar, even a small share of these supposedly affordable homes will be pushed well out of their reach.”1

Tom Chance, the Green Party spokesperson for housing, says: “I don’t think anyone can call a small share of a luxury flat for almost £3,000 per month affordable. If local prices continue to rise and the owners buy up a bigger share of their home, it will be resold at an even more obscene price.

“It’s a broken model in a broken housing market. We need to stop throwing money at the same old ideas and try something fundamentally different like community land trusts, which fix the price to local incomes.”1

The flat is situated within a new development named The Cube, which is described as “a contemporary development of stylish apartments, in a location that offers the opportunity to live London life to the full”1.

The cross-shaped building has won numerous awards for its design and appearance. A two-bed home in the development being offered through a normal sale is on the market for £1.3m, but the housing association is offering three three-bed properties at rents under £200 per week.

Thomson adds: “Isha is committed to developing within our core areas of Hackney, Islington and Waltham Forest. We were established in the 1930s to provide affordable housing in Shoreditch, which at that time was a high value area because of the commercial furniture-making interests.

“Our challenge is to provide solutions that maintain low-cost housing options, both rent and homeownership.”1