The Parents Paying Thousands to Live in School Catchment Areas

Parents are paying 18% more for a home in their dream school’s catchment area, according to new research.

This is the typical cost of securing an address in a preferred catchment area and one in four parents of school age children have paid a premium, reveals a recent survey of 4,750 adults by Santander.

Last week, the charity New Schools Network reported that parents often take “extreme measures” to get their children into a good school.

Director of New Schools Network, Nick Timothy, says: “One in ten families still do not get their first choice of school.

“Some do not get any of their top three choices and last year, more than 52,500 children were forced into schools their parents did not want them to attend.”1

The Observer has spoken to four families around the country to determine what causes parents to move house in order to secure a school place and how much it really costs.

Chris Baldwin, 44, and his wife live with their two sons in Pontprennau, Cardiff. The closest state school to their home is one of the highest ranked secondary schools in Wales, but they live just 0.25 miles out of the catchment area.

Chris explains their situation: “Our only other option is a rougher school – it’s had some bad press for kids filming fights on mobiles and bullying.

“I don’t want anyone picking on [my children]. I know what it’s like because I went to a very bad school where anyone intelligent was ostracised and bullied. I don’t want my sons to be academically disadvantaged the way I was. I want them to have the best education possible.”

Recently, the family paid off their mortgage and renovated their home.

When Chris told his friends and family their plans, “nobody batted an eyelid. I don’t really care what other people think. I’m doing it for what I think are the right reasons.”1

Patrick Southwell, 34, and his wife Rhiannon, 36, have two sons: Macsen, five, and Dylan, three. In August 2013, they spent over £50,000 moving from Queen’s Park in northwest London to Bishopston, Bristol, so that their children could attend an Ofsted-rated outstanding primary school.

Patrick says: “The main reason we moved was because our nearby schools weren’t great – all the Ofsted results were satisfactory or good.

“Plus, any child who ends up in an urban London state school faces challenges. For example, because there is very high population density, the schools are large but there is less space to play.”

He was also concerned that local deprivation was affecting achievement and other parents were choosing private education instead: “You are left with the state schools picking up the more challenging pupils who don’t come from as privileged backgrounds. The class then becomes highly segregated.”

Patrick could not afford private school fees and wanted his children to attend a state school on principle.

To afford their new home, Patrick changed jobs, spent £23,000 on estate agent fees, Stamp Duty and other moving costs, and increased his mortgage by £33,000.

However, he insists: “It was worth every penny. We’ve got our dream house, which is already worth £117,000 more than we paid for it, and have never been happier.

“Many of our neighbours previously lived in London and I would urge anyone thinking of moving to do it. By putting our children’s education first, we have landed on our feet.”1 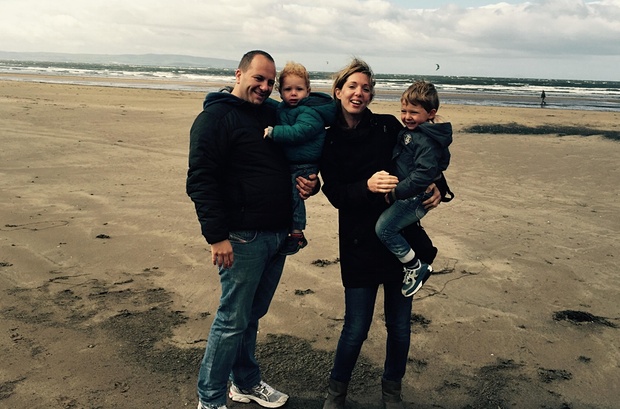 Claire, Richard and their sons

Claire, 34, and her husband Richard, 35, have two sons: Jake, three, and Aiden, one. In December 2014, they sold their Mill Hill flat in Barnet for £310,000. Now, they are about to exchange on a £450,000 three-bedroom semi-detached house in their preferred school catchment area of Bushey, Hertfordshire.

Claire explains their situation: “We’ve been living with my parents in Edgware while looking for a house to buy. We knew Bushey was very desirable because of the schools, so we wanted to make sure we were chain-free and have been saving hard.

“We were hoping that would put us in a stronger position, but it’s crazy how quickly house prices have shot up in the past few months. The house we are buying is a 40-second walk from an outstanding school and we’re paying about 15-20% more for it than similar properties nearby.”

“I’m compromising on the house – it’s not a house I’m in love with – because I’ve got to give my children the best possible chance in life and that means a school that will nurture their creative and academic abilities,” she says. “Also, we are Jewish and I wanted a school where there was a mix of Jewish kids and other faiths. Some state schools in Bushey have up to 40% Jewish kids.”

Claire adds: “Yes, we will work for longer and we will definitely be stretched financially. But we’ll have a better quality of life. This is about our children’s future.”1 Gayle and Alan Paris, both 41, and their daughter Abby, six, who has cerebral palsy, moved from Falkirk to a nearby village in December 2013.

Gayle explains: “The reason we moved was because the schools in our catchment area weren’t accessible enough.

“Abby’s disability is purely physical – she uses a wheelchair and a walking frame – and although our local schools had ramps and lifts, she would have been chaperoned everywhere. One had 14 doors between the entrance and her classroom. The other would have taken her ten minutes to get to and from the playground – for a 15-minute play-break.

“We wanted her to take part in school the same as her peers. Instead, she would have been singled out, unnecessarily dependent on adults and isolated from her friends.”

The family discovered a newly built school in nearby Maddiston, where Abby could walk around by herself and would not need an adult with her all the time.

Gayle says: “It was rated a very good school, but that was irrelevant to me. We could always plug any gap in her education, but not a lack of independence or friendships with her peers.”

However, the council said that as Abby did not live in the catchment area, she was unlikely to get a place.

Gayle remembers: “I had sleepless nights trying to work out how we could afford to move there. In the end, my husband got a better-paid job and we borrowed an extra £80,000, then spread our mortgage over 30 years.”

But Gayle says it was “absolutely” worth it: “Abby walks to the playground by herself and has 90 minutes of playtime every week, just like her friends. Her confidence has improved dramatically. But after we moved, our occupational therapist said Abby probably would have got in anyway.”1