The Oldest Towns in the UK 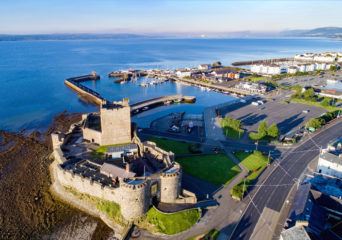 The UK’s heritage is all around, but for those craving culture and history, the following towns boast the most.

The exact dates of the oldest continuously populated urban settlements are hard to determine, but these towns in Northern Ireland, England and Wales have solid factual evidence of inhabitation dating far back.

Would you move into any of these historic habitats?

A 1909 report on the town’s history by Samuel McSkimin reads: “The ancient accounts of Carrickfergus present little but traditionary legends.” He quotes a source that explains the area was inhabited by Celts from northern Britain “near three centuries before the nativity of Christ”1.

However, the volume also indicates that the town was only fully established after the invasion of John deCourcy, an Anglo-Norman knight, in 1167. He later built a castle that is one of Ireland’s best-preserved Norman buildings. The 2001 Census recorded a population of around 27,000.

The town’s abbey’s founding charter dates back to 1070, however a monk named Benedict from France is believed to have gone to Selby following instructions in a dream, according to A History of the County of York. William the Conqueror granted a piece of land for the abbey, and Selby Abbey’s records show over 80 charters, confirmations and other royal deeds.

The town council believe that by the 18th century, Selby was a thriving sea access route, with over 360,000 tonnes of shipping coming through the river every year.

The town used to be an industrial coal mining and shipbuilding area, but now, heavy industry is less prevalent.

This East of England town originated in Viking times, with the name deriving from Hlothver and the suffix toft, meaning homestead. In the Domesday Book of 1086, it is called Lothu Wistoft and is described as a settlement of 20 families.

Around 90% of the population died in the 1349 Great Plague, but the town recovered in the later Middle Ages.

A harbour opened in 1831 and the population is now around 60,000. Lowestoft’s beach, museums and maritime culture attract tourists.

In Saxon times, the town was inhabited, however, the town began to take shape when the Abbey was founded in 657 by Oswy, King of Northumberland. During the Dissolution of the Monasteries, the Abbey stopped being used.

The town was the location of Bram Stoker’s gothic novel Dracula, and now hosts the annual Goth Weekend, on from 30th October-1st November this year.

Ipswich’s name comes from the Old English, Gippeswic, dating back to the early 600s. In 2013, the town council disputed the claim of being Britain’s oldest recorded town with Colchester.

The town could be the oldest Anglo-Saxon town, but was inhabited before this by the Romans. The largest villa of this period was at Castle Hill.

The original settlement was arranged around the port, where it traded with towns and communities in modern-day Germany.

Colchester has been dated back to the Palaeolithic period by six hand axes found in the area. The tourist board claims it is Britain’s oldest recorded town, as Pliny the Elder used its Roman name in 77 AD. He wrote of Anglesey in Wales: “It is about 200 miles from Camulodunum, a town in Britain”.

Colchester was the provincial Roman capital of Britain later on, and the Normans built Colchester Castle within ten years of conquering England.

Carmarthenshire is believed to be the oldest town in Wales, housing a Roman fort from 75 AD. It was a centre of industry and the South Wales Railway came to Carmarthen from Swansea in 1852.

A stone hand axe was found in Abingdon, dating the town back to 4,000 BC. It is claimed that the area was occupied in the early to middle British Iron Age, from 800-100 BC, due to a defensive structure beneath the present town centre.

Thatcham was believed to be the UK’s oldest town for quite some time, due to a history of continuous inhabitation from 7,770 BC, in the Mesolithic era, from which well-preserved remains were discovered.

Bronze and Iron Age settlements have also been found, plus evidence of a Roman town in the current area.

The Black Death of the 14th century brought great loss to the town, but the present day population is 25,000.

Thatcham’s claim to be the UK’s oldest town in continuous settlement was surpassed by Amesbury. Research from the University of Buckingham revealed last year that carbon dating proved this town is the oldest. Two miles from Stonehenge, the town goes back 5,000 years.

A researcher from the University, David Jacques, said the finding “blows the lid off” knowledge of Stonehenge. He commented: “It provides evidence for people staying put, clearing land, building and presumably worshipping monuments.”1