East London has come out as the capital’s houseshare hotspot, according to a new report. 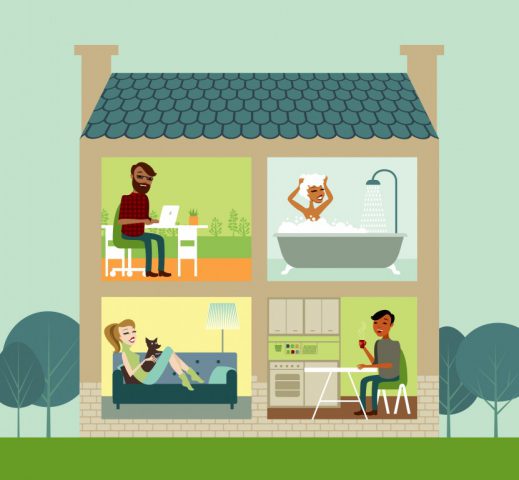 Landlords seeking further investment and tenants searching for a room should look to the east, where around 45% of London’s rental supply is found.

Research from SpareRoom.co.uk found that E1 is the London postcode with the highest amount of rooms available to rent. This postcode stretches from Mile End to Aldgate, encompassing Shoreditch and Whitechapel, two zone 1 hotspots on the north-eastern edge of the City of London.

Between July and September, there were more than 10,000 advertisements for rooms in these areas listed on SpareRoom, with prices ranging from £455-£1,049 per month.

Rents are as varied in E14, which has the second highest supply of rental rooms. Including Canary Wharf and the Docklands, almost 9,000 rooms were listed in this postcode during the same period, costing from £425-£1,144 a month. Canary Wharf’s surrounding district is being regenerated into a residential hub, with thousands of new homes, shops and schools and a new high-speed Crossrail station, to open in 2018.

As less than five people are seeking each room available in these postcodes, the supply-demand ratio is also the lowest in these two parts of London.

Director of the flat and house share website, Matt Hutchinson, comments on the data: “Those struggling to find rooms to rent in flat and house shares would be mad not to consider east London. The east has been the most regenerated area in recent years, so there are lots of new build flats, rather than the low-rise Victorian housing you’ll find in other areas.

“Demand outstrips supply across London, so haggling on your rent is risky. But it’s certainly more of an option where supply is higher and demand is lower than elsewhere, such as E1. Good references from previous landlords will help, too.”1

The N1 postcode in north London, including Angel, Islington and Canonbury, has the most rooms available. Between July and September, 2,900 rooms were advertised, while the level of demand is also high, with up to nine people searching for each room. The average monthly rent is therefore comparatively high, at £845 per month.

In west London, Acton and Shepherd’s Bush have the highest supply of flatshare rooms available. At an average of £732 a month, Acton also has the least expensive rents of all the areas listed. It is a great place to invest, as redevelopment projects are improving the town centre.

The following areas have the least number of houseshares available. Could these be potential investment locations?

London postcodes with the lowest number of rooms to rent

For tenants, the following places are the cheapest to rent in the capital.

The cheapest areas to rent in London

And the most expensive spots in the capital are as follows:

The most expensive areas to rent in London