The Prime Minister, David Cameron, has made a speech that details plans to stop foreigners buying UK homes with laundered cash in a bid to defeat corruption.

Mr. Cameron pledges to expose the use of “anonymous shell companies” to buy expensive UK properties, usually in London.

In the speech in Singapore, he said that the UK must not become “a safe haven for corrupt money from around the world.”

He also calls on the international community to tackle the “cancer of corruption.”

Mr. Cameron is currently on a four-day tour of South East Asia. Yesterday (27th July 2015), he announced that the UK and Indonesia have agreed measures to challenge the “shared enemy” of so-called Islamic State terrorism. 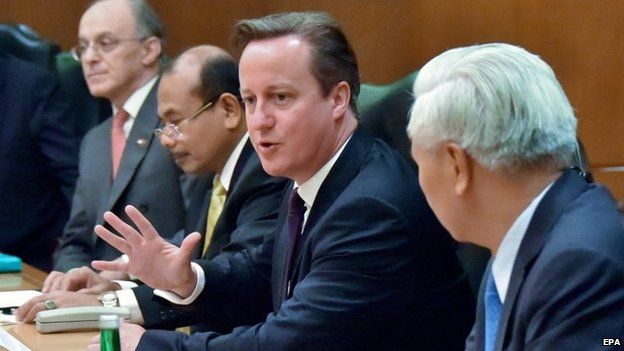 The trip will also see him visit Malaysia and Vietnam.

31 British business leaders accompany him, hoping to increase trade with the UK and discussing the fight against extremism.

Mr. Cameron describes corruption as “the enemy of progress” and calls for a “global effort” to tackle it, saying the world has “looked the other way for too long.”

A report by anti-poverty organisation One from 2014 reveals that around $1 trillion (£600 billion) per year is taken out of poor countries due to corruption, warning of the use of phantom firms and money laundering.

Recently, the National Crime Agency found that foreign criminals are driving up house prices in the UK by laundering billions of pounds through purchasing expensive properties.

In his speech, Mr. Cameron said that properties in the UK, particularly in London, “are being bought by people overseas through anonymous shell companies, some with plundered or laundered cash.”

Shell companies are non-trading firms that have a particular purpose for their owners.

Over 100,000 UK properties are registered to overseas firms, with more than 36,000 properties in London owned by offshore companies.

Foreign firms own around £122 billion worth of property in England and Wales.

The Government is set to release Land Registry data this year that details the overseas companies that own land and property in England and Wales.

It could also force a foreign company bidding for a Government contract, to “publicly state who really owns it.”

Laura Taylor, Head of Advocacy at Christian Aid, welcomes the promises, saying this is “another step forward in the battle for greater transparency worldwide.”

She adds: “Countering corruption is of fundamental importance in the fight against global poverty because of its impact on developing countries.”1

UK Director of One, Diane Sheard, continues: “Lifting this veil of secrecy will help developing countries to identify and recover these funds, which should be spent on essentials like health and education.

“We hope that making information public about foreign companies that own property in the UK will deter money launderers from doing business here.”1

Robert Palmer, head of the money laundering campaign at charity Global Witness, concludes: “London is a very attractive destination for very wealthy people, including corrupt officials who have looted their state coffers.

“What the Prime Minister has announced today is a really good step forward.”1