London has experienced a dramatic squeeze to school places due to its rising population. This year, one in six primary school children did not get into their top choice of school.

However, new housing developments in the capital could help, as many are including on-site schools.

King’s Cross Academy is a new primary school within one of London’s biggest regeneration schemes. The school is beneath the 14-storey Plimsoll Building, which includes 255 new apartments.

The school is now taking applications for two reception classes and a 26-place nursery, which will open in September. 420 places will be available at the academy, which will share buildings with Frank Barnes School for Deaf Children, and all children will be taught sign language.

The developer, Argent, says that families from nearby Islington are now considering King’s Cross. They are drawn to the school and family-orientated features, such as fountains in Granary Square and Gasholder Park, opening later this year.

Emyr Fairburn, headteacher of the school, predicts that 25% of pupils will live in the new apartments. He is pushing for partnerships with businesses such as Google, Waitrose Cookery School and Eurostar.

Fairburn says: “Many are from homes with no outdoor space.

“The children can see the station through our huge windows. Train drivers will be coming in for talks and pupils will be able to visit Paris, as we’ve adopted French as a main language.”1

Kensington and Chelsea is the worst area in the UK for school places. Just 61% of children in the borough received their top choice. However, 210 new primary school and 26 nursery places will be available from September 2016, when the £16m Kensington Primary Academy opens a reception class.

St Edward, in partnership with the council, is building the school at the 375 Kensington High Street development, where homes cost upwards of £925,000.

Schools in Wandsworth have been so oversubscribed that from September 2016, the council is abolishing the sibling priority rule. 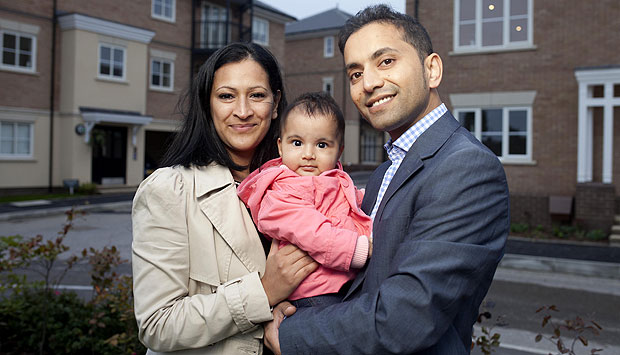 Mabs Alam and Shamsun Nahar with their daughter

Taylor Wimpey has recently been approved a new Battersea development in the Nine Elms area. 290 private and affordable homes will be built, alongside a new building at St Mary’s Catholic Primary School, including a new early years centre. The school is the Evening Standard’s flagship for the Get London Reading campaign.

The Government predicts that the country will need 200,000 more primary school places by 2020. The locations of these spots may lead families into areas they would not have looked at before.

Dalston was recently named the coolest place to live, and could attract more families, as Telford Homes has partnered with the Holy Trinity Primary School at the Vibe housing scheme to build a primary school that will open next year.

The Ferrier Estate in Greenwich is being transformed by Berkeley Homes’ Kidbrooke Village, a £1 billion regeneration project. The new neighbourhood will include Wingfield Primary School, and is opening seven years earlier than planned.

Barratt Homes has recently gained planning permission for a development in Kingsbrook, near Aylesbury, Buckinghamshire. 2,450 new homes will be built, alongside two primary schools and hopefully a secondary school, potentially opening by 2019.

Dagenham has had a problem with school places recently, but All Saints School has recently begun a £7.1m renovation project. The Catholic school for 11-18-year-olds will take 300 more pupils by 2020 in the new three-storey building, including four science labs and a food technology room.

Year 11 pupil Holly Boyes says that her school is now happier: “Being in a better, brighter environment helps your learning.”1

Headteacher Kevin Wilson also thinks the school has been transformed: “There’s a really positive feeling among staff and students.”1

Young families are attracted to these new developments, as schools provide a solid foundation for their children’s futures.

Mabs Alam, 38, and Shamsun Nahar, 35, have bought a three-bedroom terraced house at Arboretum in Epping, Essex, after having their six-month-old child.

Higgins Homes has rebuilt St John’s Church of England School at the project.

Shamsun says: “We knew we’d found the perfect place. We’re hopeful our daughter will benefit from living in a secure neighbourhood.”1