It has been a particularly spooky year for some UK property owners, with Brexit and a snap General Election bringing an uncertain market. Some property owners have seen the price of their homes drop in line with a lack of buyer demand.

In light of Halloween and all the ghastly things that come along with it, hybrid estate agent eMoov.co.uk has compiled a list of the top ten areas of the UK that have suffered the scariest house price drops of the past year… 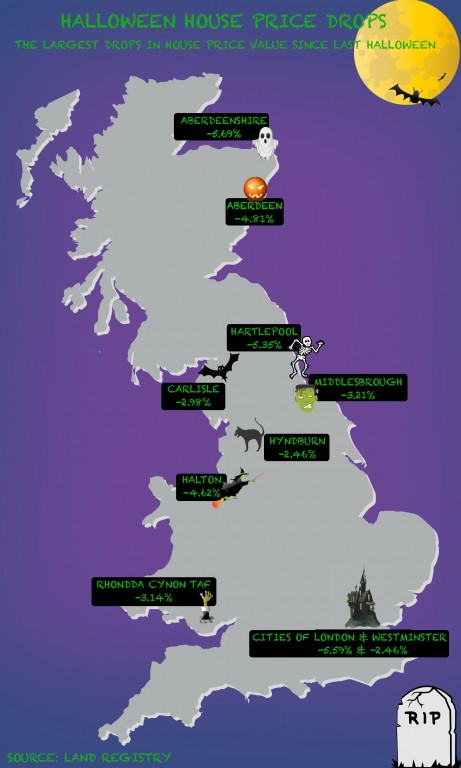 Topping the list is Scotland’s Aberdeenshire, which suffered the frightening price drop of 5.69%. Although property values in Scotland remain lower than the UK’s average, this part of northern Scotland has been hit hardest over the last year, with a typical house price of £188,876 – largely dye to the continued economic slump from a decline in the oil industry.

Prices in the capital have taken a spine-chilling turn over the last 12 months – not because of ghosts or zombies – but instead because of the inflated price of property. The City of London has endured a decrease of 5.59%, although prices still average £800,802.

Durham’s Hartlepool follows closely behind, with a drop of 5.35%, taking the average property value to £100,957.

Keeping up with the wider area, the largest city in the region has seen a spooky dip in house prices, down by 4.81% over the year to an average of £167,903.

Heading back to England, Cheshire’s Halton has suffered a haunting fall in average values of 4.62%, taking prices to £127,003.

North Yorkshire’s Middlesbrough experienced a decline of 3.21% in average house prices over the year, bringing the typical value down to £108,904.

Wales’ darkest price decline was 3.14% in the south, dropping the average house price to an almost supernatural £101,675.

Another contender in the capital, prime central London’s City of Westminster experienced a grim drop of 2.46% to a devilish average of £962,510. Lancashire’s Hyndburn accompanies it, where property values also fell by a gruesome 2.46% to an average of £93,628.

Russell Quirk, the Founder and CEO of eMoov, comments: “Although the current state of the UK market may appear scary, the haunting uncertainty that came with the snap election and the referendum has begun to slowly vanish, so we should start to see positive price growth creep across the majority of the UK before next Halloween.”