The Purpose of Brixton’s Anti-Gentrification Protest

The Reclaim Brixton protest expressed worries that the area’s culture is being twisted and replaced.

Saturday saw campaigners in South London announce their solutions to gentrification in Brixton. The majority of these options were based around housing and Lambeth Council’s policies. The demonstrators demanded: “Build more houses for working people”, “rent caps”, “Lambeth to stop evictions” and Lambeth to “prioritise repair of estates over regeneration”.

Some focused on small businesses, and called for the Council to protect those that represent “the community”. Some simply declared throughout the day: “Lambeth is not for sale”.

These statements may express issues in this specific area, but reflect the fears of gentrification in many parts of the capital. Many are concerned about the rising cost of property and land, and the social changes this is causing.

Traditionally, Brixton was a cheap place to live. However, spiralling property prices and rents are making it too expensive for those on low incomes, but whose salaries are too high to entitle them to social housing. As a consequence, wealthier Londoners are moving into the area and those who were born and brought up there can no long afford to stay.

Another area of concern is the retail spaces beneath Brixton’s railway bridge. Network Rail, who owns these spots, is working with the Council to renovate them. Some residents believe this could wipe out local traders.

Carolyne Hill, born in Brixton, would not be opposed to the refurbishment of the area, but does not believe Network Rail will work with small businesses to allow them to return.

“You have family businesses that have been there for three generations,” she says. “They [Network Rail] want to whitewash it. They want to bring in, you know, Pret, Subway. It’s the cookie-cutter mould of gentrification.”1

The protestors at the demonstration highlighted the cultural and ethnic mix in Brixton. There were many Afro-Caribbean campaigners, including the Brixton Black Revolutionaries group, who fought during the Brixton Riots of 1981 and 1985. 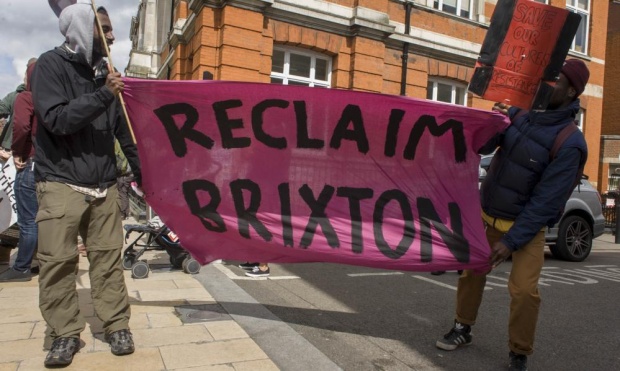 The Purpose of Brixton’s Anti-Gentrification Protest

The music was Latin American and the food from all over the world. The general theme of the demonstration was the worry that the boring, corporate sort would replace Brixton’s varied culture.

During the day, some protestors aimed to occupy the Town Hall and smashed the window of Foxtons estate agents, a sign of yuppie culture. But it seems likely that Foxtons will stay and the people they sell to will still come.

The idea of gentrification is not new, even in Brixton. It has certainly been quicker recently, but has been around for years.

Sociologist Ruth Glass created the term in 1964, when reacting to what was happening in her home of Islington.

Fifty years ago, a middle-income family could buy an attractive Victorian three-bedroom home in Highbury. Twenty-five years ago they wouldn’t be able to, but they could buy in Hackney.

Now, the children of the couple that bought in Hackney are struggling to get onto the property ladder. They’re moving further out and changing the face of the places they arrive in. These parts become more middle class and therefore expensive. Suddenly, those priced out by gentrification are creating the problem for other people.

Two years ago, Brixton writer Alex Wheatle described some of the problems with controlling gentrification in a short film for The Guardian. He had previously been imprisoned for his role in the 1981 riots, but was then awarded an MBE in 2008 for his services to literature.

He remembered the days when Brixton Market was filled with the sound of reggae and the smell of Caribbean food. But also, he does not mind the changing scene: “I must admit it’s nice to see a variety of people enjoying Brixton in a way I never thought imaginable when I was 17. Brixton was a feared place to be.”1

One of the main concerns surrounding gentrification is that the ethnic society will be diluted. However, diversity is stronger than ever. In Lambeth as a whole, containing Stockwell, Clapham and part of Vauxhall, there has been a wide range of races and cultures entering the area, highlighted in the last Census.

So what can Lambeth Council do? Well there is only so much that a local authority can do to change house prices and private rents. They could make schools, parks and streets less appealing to those wanting to live there, but this will also affect local residents.

Bill Parry from an organiser of the protest, Unite, says that Lambeth faces big cuts: “This is about big politics and I don’t think an individual council can solve it. But they must put themselves on the side of the people who elected them.”1

Parry believes that people need to push campaigns against rogue landlords and would like to see Labour building more council homes nationally.

Matthew Bennett, Lambeth’s cabinet member for housing, emphasises a project for building 1,000 new council houses in the next four years, aimed at helping residents on low incomes who cannot buy or rent privately.

But this programme is faced with opposition from those whose estates would have to be rebuilt in order to create extra housing. They believe that, like gentrification, communities will be broken up.

Lambeth is also evicting those in long-term, short-life council homes, bringing allegations of social cleansing. Bennett argues that the sale of these properties has raised £60m so far, which will fund the 1,000 new council houses. But whose argument is stronger?

Bennett also stresses that those likely to be priced out of Brixton are not the very poorest residents. Despite the pressures on social housing, the 20,000 people in council homes are secure and will not be leaving unless they choose to.

And sometimes, people do want to leave Brixton. For those who bought properties when they were cheap, they can now sell at huge profits and relocate to the outskirts. Who they sell to is not their problem.