Rightmove Claims its New Site is Not a Reaction to OTM

Rightmove claims that its new website design has been in the pipeline for a year and is not a reaction to the launch of fellow property portal, OnTheMarket (OTM).

Rightmove is due to make wholesale changes to its site, due to the fact that 60% of its visitors now browse on their mobile phone or tablet.

The new site will include improved functions, such as filters, which allow prospective buyers to select multiple criteria at once, for example, choosing both detached and semi-detached houses.

Rightmove has received feedback from agents on the new design, which has been positive so far. 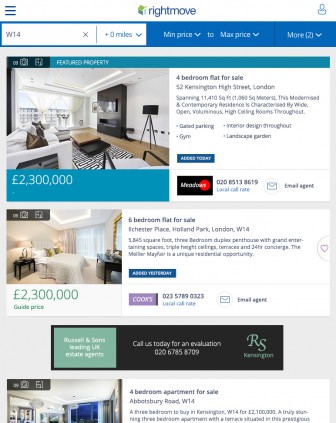 Rightmove Claims its New Site is Not a Reaction to OTM

Other features include a side bar map of the area being searched within and a change location and criteria bar that will move from the left-hand side of the page to the top.

The horizontal bar at the top of the page will stay in place regardless of whether the user scrolls down the page. This is similar to the feature on OTM, although Rightmove argues it came up with the concept before OTM was launched.

Housing Market Analyst at Rightmove, Miles Shipside, says: “We started this over a year ago, so in terms of when OTM was launched, this was in progress before.

“When you are a UK top ten institution, you keep moving. You have momentum. But technology is changing all the time.”1

Featured agents and properties will also be visible on Rightmove’s mobile site and apps for the first time.

The site will automatically convert and resize its data to fit all devices.

The new design is being trialled by a small group of agents at present, in its alpha phase. The beta stage will follow, where a select number of consumers can view the new site before any small changes are made before its roll out. A date has not yet been set for this.

Rightmove’s Director for Estate and Letting Agencies, Alex Cubitt, comments: “The vast majority of agents’ feedback has been positive.

“They like the design, think it’s clean and simple. They like the featured agent feature and also featured property. They think it is much better than the current version. They feel like it will get much more engagement now it feels like a true listing.

“For the first time, this is all available on mobile; that’s the best news for agents we think. The feedback we have had so far has been very good.”1

Head of Product Development at the portal, James Micklethwait, says: “We make a couple of hundred small changes a month. But this is a big project. We started it more than a year ago.

“The reasons are from a consumer point of view, mobile, which we now view as our core business. It is now more than 50% of our business.

“We have always had a different mobile site but we are now using the same design. Essentially it means one bit of code, which works our what device you are using and adapts for that.

“We always have an eye on the market but this is more about listening to our users.”1

Britain is made up of nosey neighbours!

Britain is officially a country of nosey neighbours, according to new research. Analy...

OnTheMarket Confident it Will Overtake Zoopla

OnTheMarket has achieved another record-breaking month, with traffic figures increasi...