The cost of renting in London has climbed by hundreds of pounds a month, research from lettings and estate agent Benham and Reeves shows.

This is due to dwindling rental stock levels and could continue to do so if the issue is not resolved.

Benham and Reeves analysed both the change in available rental stock across the London market in the last year, as well as how this has impacted the cost of renting across the capital.

Across the whole of London, the number of available rental properties listed on the market decreased by 48% between Q3 2020 and Q3 2021. At the same time, the average cost of renting has increased by £109 per month.

Only the borough of Barking and Dagenham saw the level of available rental stock increase, up 1%. The average cost of renting in the borough has also increased by an average of 1%.

The rest of London, however, has seen the level of rental stock fall by between 10% to 30% year on year. The average cost of renting has climbed by 4%, which Benham and Reeves reports is an increase of £49 per month for the average tenant.

The average monthly rental cost has increased £95 per month in boroughs where rental stock has dropped between 30.1% and 50% compared to last year, resulting in a 6% increase in the average cost of renting.

In 10 London boroughs, the level of available rental stock currently on the market has more than halved in the last year. The cost of renting across these worst-hit boroughs has climbed by 9% on average, equating to a rental increase of £179 per month.

Marc von Grundherr, Director of Benham and Reeves, comments: “Restrictions imposed as a result of the pandemic saw demand for London rental properties evaporate almost overnight and many landlords were forced to dramatically reduce their rental income expectations simply to secure a tenant.

“However, we’ve seen waves of tenant demand return to the capital as social and workplace restrictions have been eased but while this demand is starting to snowball, the level of available rental stock remains notably lower than it was a year ago.

“As a result, the cost of renting has climbed quite considerably in many boroughs, with tenants now paying hundreds of pounds more a month as a result. Should stock levels remain muted, there’s no doubt that this upward trend will continue and the cost of renting in London will climb even further.”

Demand and supply for rental stock drops across UK

Rental stock has dropped 12% across the UK’s major cities, with London seeing 20% fewer rental properties now on the market.

Belfast, Cambridge and Newport have been hit the hardest, seeing declines of -57%, -36% and -27% respectively. Comparatively, Edinburgh, Swansea, Leicester, Sheffield, Leeds, Southampton and Plymouth have seen an increase in rental homes available on the market.

Meanwhile, demand has dropped by 5% across 23 major UK cities and 3% across London. Belfast is the only city on Howsy’s list that has seen an increase in demand, at 16%. Portsmouth and Newcastle saw no annual change.

Calum Brannan, founder and CEO of Howsy, said: “The spread of the Coronavirus has clearly caused an immediate impact on rental demand and stock levels across cities which usually remain sought after amongst tenants.

“For market activity to have fallen so considerably across the board tells you just how much the market has been impacted by the pandemic, but while demand has waned somewhat on an annual basis, it is stock levels that have declined the most and there are still plenty of tenants looking for rental properties for those landlords still striving to provide them.

“For these landlords, remaining visible on the market despite the wider landscape is the sensible approach to ensure any void periods are as short as possible and any financial loss is as limited as can be.

“This can be done via online and hybrid agents in particular, who can list and rent your property without any physical interaction needed; so not only does your buy-to-let remain profitable, but there is no risk in doing so.”

The January Private Rented Sector (PRS) report, released yesterday, also shows that despite this record high, the supply of rental stock has also fallen to the lowest level in seven months.

David Cox, ARLA Propertymark Chief Executive, said: “This month’s results are a huge blow for tenants. With demand increasing by more than half, but rental supply falling, rent costs are unsurprisingly being pushed up.

“Our recent research found that tenants could miss out on nearly half a million properties as more landlords exit the traditional private rented sector and turn towards short-term lets which will only serve to worsen the problem for those seeking longer-term rental accommodation.

“With the Spring Budget around the corner, it’s important that the Government works to make the private rented sector attractive to landlords again, rather than introducing complex legislation which ultimately squeezes the sector and leaves tenants worse off.”

New research has revealed that there has been a sharp decline in the number of homes listed for rent over the last six years.

Figures from Home.co.uk reveal that there has been an 11.6% decline in available rental stock since July 2011. This was led by a 34.7% fall in properties to rent in Scotland.

In Wales, there have been falls of 28.1% while the South West of England also saw a substantial decline of 26.5%.

Overall, seven out of eleven regions in the UK saw a fall more than the UK wide average. More prominent falls included a 24.6% slip in the East Midlands, 20.8% in the South East and 16.7% in the West Midlands.

Only one region, the North East of England, experienced a rise in supply, with a substantial increase in rental stock of 33.4%. This is owed in part to the number of accidental landlords, with many would-be sellers looking to let out there properties as opposed to selling at a loss.

While supply in the PRS has fallen, demand from tenants continues to rise, with many would-be buyers mean priced out of the market.

A number of tax changes, such as the phasing out of mortgage interest tax relief and Stamp Duty rises, have led many landlords to leave the market – further exacerbating the imbalance.

In turn, this is moving to drive up rents across many regions of the UK. 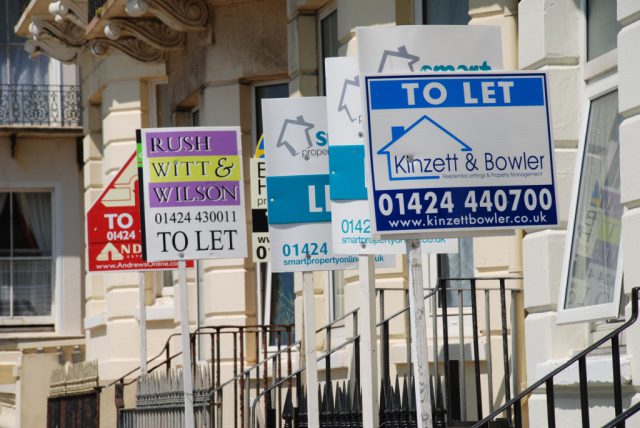 Wales has seen rents rise by 113% during the last year, while Yorkshire has seen increases of 8.4% over the same period. Scotland too has seen rises, of 5.4% on average.

London however has actually seen rents fall by 5.3% in the last twelve months, largely as a result of the rush in investment seen before the Stamp Duty changes came into force in April 2016.

Director of Home.co.uk, Doug Shephard, observed: ‘It is ironic that the government’s justification for tax changes in the PRS was to ‘level the playing field’ for wannabe homeowners. The result of this barrage of red tape and taxation, at both local and national government levels, has meant that the supply of rental properties has fallen behind demand in most regions thereby driving up rents. Of course, it’s not the first time that government tinkering and tax grabs have backfired but the upshot for Generation Rent is appalling.’[1]

‘The ‘elephant in the room’ for the government is that record low mortgage interest rates have driven unprecedented investment in the PRS over recent years. Simply put, those already with significant home equity have been able to come up with deposits for properties intended to let whilst aspiring homeowners are as cash-strapped as ever as they pay out huge sums in rent. However, ultra-low interest rates and the associated pain for renters look set to persist for the foreseeable future,’ he added.[1]