Fergus Wilson makes it back into the Headlines with Controversial Ban

Fergus Wilson, one of Britain’s biggest buy-to-let landlords, has made it back into the headlines with yet another controversial ban.

Wilson, 69, has now banned “coloured” people from renting his properties because, he says, they leave them smelling of curry.

Fergus Wilson makes it back into the Headlines with Controversial Ban

In an email to the letting agent acting on behalf of Wilson, who runs a property empire in Kent, he said: “No coloured people because of the curry smell at the end of the tenancy.”

When contacted by The Sun, Wilson defended his comments, saying: “To be honest, we’re getting overloaded with coloured people. It is a problem with certain types of coloured people – those who consume curry – it sticks to the carpet. You have to get some chemical thing that takes the smell out. In extreme cases, you have to replace the carpet.”

Earlier this year, Wilson made headlines after saying that he would no longer accept victims of domestic violence as tenants, as jealous or angry partners typically cause damage to the property by kicking down front doors and punching holes in the interior.

Single parents, workers on low incomes, families with children, pet owners, smokers and single adults were also among those who Wilson banned from his properties.

A spokesperson for the campaign group Hope Not Hate responded: “You simply cannot treat people like this and deny them a place to live due to their skin colour.

“This is the unacceptable face of the housing crisis. There is something broken in the system when such a powerful figure can get away with such an appalling policy.”

They added: “Fergus Wilson’s comments would seem laughably offensive, a throwback to the Alf Garnett era, if they weren’t so serious in their implication.”

Rebecca Hilsenrath, the Chief Executive of the Equality and Human Rights Commission, also reacted: “There are still deep inequalities in our society, as our race report demonstrated, and these comments show why.

“As a country, we all assume we have left the dark ages behind, but clearly there is more to be done.

“We will investigate and will be asking Mr. Wilson to explain his actions. Unless we are satisfied that he will not break the law in the future, we will take legal action.”

And the Manager at letting agent Evolution, which manages a number of Wilson’s properties, Roy Fever, insisted: “We don’t condone this at all. We would never implement a policy like that. We put through anyone to the landlord and it is up to the landlord who they take on.”

Arguably Britain’s most notorious landlord, Fergus Wilson, has caused yet more controversy by issuing a new lettings criteria for tenants.

The notorious landlord, who previously owned around 1,000 rental properties across Kent, is said to have issued the new criteria through his letting agent, Evolution. 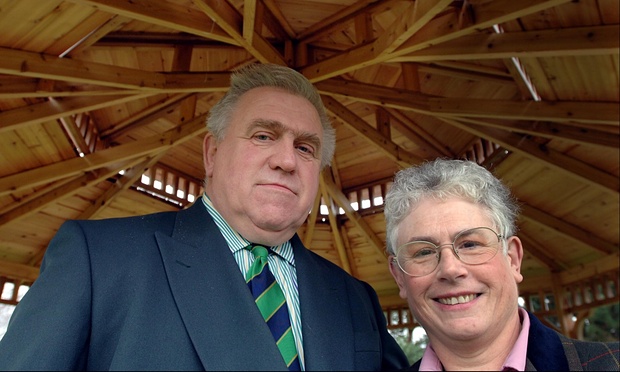 The notorious landlord, Fergus Wilson, and his wife, Judith

The controversial criteria have been posted on a Facebook page for residents of Ashford, Kent, where some of Wilson’s portfolio is based.

Last year, the notorious landlord sold half of his property portfolio at auction, claiming that the age of the amateur landlord is coming to an end. He referred specifically to tighter lending criteria for buy-to-let landlords.

But it appears that the controversial investor is still very much in business.

Wilson’s statement concludes: “Not all tenants on benefits are a problem, but all problems are on benefits.”

While many landlords have their own rules regarding benefits, smoking and pets, Wilson’s strict list is likely to cause great offence amongst renters in the area.

And although Wilson is said to have sold many of his rental properties to overseas investors, tenants are most probably hoping that he finally sells the rest of his portfolio and is no longer operating in Kent’s private rental sector.

Landlords, what do you think about the latest news from the notorious landlord? Do you yourself enforce such a strict lettings criteria for your properties?

There are many ways that you can ensure your property is protected, regardless of the type of tenant occupying it. Remember that you must act responsibly and stick to the laws of the private rental sector when letting to any tenant. Our free monthly newsletter will keep you up to date with any changes: www.34.207.192.121/register.

Britain’s biggest landlord has sold around half of his buy-to-let portfolio in the past year, claiming that the age of the amateur landlord is coming to its end.

The Financial Times reports that Fergus Wilson and his wife Judith, who are both former maths teachers, have sold about 400 of their 900 buy-to-let properties in Kent, with most sold to overseas buyers and around 50 to their tenants.

When the buy-to-let mortgage launched in the mid-1990s, the Wilsons were able to expand their portfolio, as high loan-to-value (LTV), interest-only loans were incredibly easy to acquire.

However, the notorious property investor believes the age of the amateur landlord is “over”, as lending criteria has become tougher.

“If you were an amateur landlord in those days, as long as you could spell your name, you would get a mortgage,” he explains. “No one appeared to check anything. I wouldn’t say it is impossible, but it is much tougher. Some [banks] are offering LTV of only 60%.”

He adds: “Is it the wrong time to be an amateur landlord? Yes. Some people will succeed, but on the whole, too many amateurs walk into pitfalls… The day of the amateur landlord is over.”

Over the past few months, a number of banks have tightened their buy-to-let lending criteria.

OneSavings Bank, for example, has put its focus on professional buy-to-let investors following the Brexit vote, as they are “better positioned to withstand market volatility”. The Kent-based bank has also tightened conditions for smaller landlords.

Ray Boulger, of mortgage broker John Charcol, agrees that it has become much harder for amateur landlords to operate, following changes to the tax system and regulations.

He comments: “For lower yielding parts of the country with higher prices, like London and the South East, it will become impossible to get a high LTV mortgage, unless properties are put into a limited company. LTV will be limited to about 55-60%. New landlords will have to save a bigger deposit.”

Mr. Wilson, 68, who announced his plans to sell his £250m buy-to-let portfolio in 2015, says he is still waiting for a number of sales to complete.

Last year, he revealed that he needed to repay around £45m to 14 lenders, but he hopes to emerge with a £200m profit.

Wilson believes that June’s Brexit vote will ultimately boost the selling process: “I think foreign buyers are saying at the moment that Brexit helps, as it is cheaper [to buy UK property] in their money [following the fall in sterling]. Many are trophy hunters – they want to impress their friends with a photo of the house they own in Britain.”

However, the latest official house price figures show that the property market has cooled over recent months: /property-market-cools-wont-crash-claim-experts/

Britain’s biggest and most notorious landlord, Fergus Wilson, has been caught in Brexit chaos as he attempts to sell his 900-property strong portfolio.

Wilson had planned to sell his entire portfolio to a pool of foreign investors, including both wealthy individuals and institutions. However, many buyers are pulling out of deals following last week’s EU referendum.

The Telegraph has reported that Wilson is still waiting for a large number of exchanges to complete, meaning that some deals could potentially collapse amid Brexit uncertainty.

Britain’s biggest landlord with his wife

Lawyers and property firms are warning that large numbers of buyers are postponing or pulling out of deals as a result of the Brexit, over fears that economic uncertainty would make their purchase unaffordable, or hoping that prices will drop over the coming months or years.

A number of firms have reported that residential property deals are falling, with one firm, The Partnership, claiming that 50% of deals are collapsing.

At the end of last year, Wilson announced his intention to sell his entire £250m portfolio, saying he was sorry to say goodbye to his properties, but “common sense must prevail”.

However, Wilson believes that other buy-to-let landlords will become richer as a result of the Brexit, as tighter immigration policies, proposed by Boris Johnson and Michael Gove, are likely to lead to better quality tenants.

He explains: “I don’t think Brexit will have much effect on buy-to-let house prices, because they’re mainly cheaper properties worth less than £500,000 outside of London, so the prices don’t have as far to fall.

“People have got to have somewhere to live, and immigration is forcing up rents at the bottom of the market. Vultures like myself have bought all the cheap properties, and we put in them the people who are able to afford the rent.”

He continues: “At the moment, the vast majority of my tenants are Eastern Europeans who work in low-skilled work but are cash rich. Poorer English people are totally off my radar – they don’t really get a look in, as they are mainly in council houses.

“I think the points system being designed by Boris Johnson and Michael Gove will help landlords because it will help us get better quality tenants. They won’t send the ones that are already here home, and if they only let skilled ones in, that means better tenants for us.

“Ten years ago, I housed a lot of single mums and battered wives who were a good category of tenant. They were pretty good at paying the money and looking after the houses. But then in about 2005, the Eastern Europeans started coming and they made really good tenants. I haven’t advertised a property for five years because they always ask, ‘Can my friend move in?’”

Wilson adds that he did not vote in the EU referendum, but if he did, he would have voted to leave.

He says: “I let the leave campaign put posters up on my land and I was looking for a big, big queue like on Nigel Farage’s poster. But I couldn’t see them.”1

Britain’s biggest landlord has sold around half of his buy-to-let portfolio in the ...

Britain’s biggest and most notorious landlord, Fergus Wilson, has been caught in Br...