The Scottish property market continues to defy the slowdown elsewhere in the UK, with Scotland now leading house price growth across Britain, reports Your Move.

The average house price grew for the seventh consecutive month in August, by 0.5%. On an annual basis, house prices have risen by 4.8% since August 2016, compared to a rate of 2.1% in England and Wales.

Only the East of England (4.5%) comes close to the annual growth seen north of the border, while the average house price in London is down by 0.7% on last year. 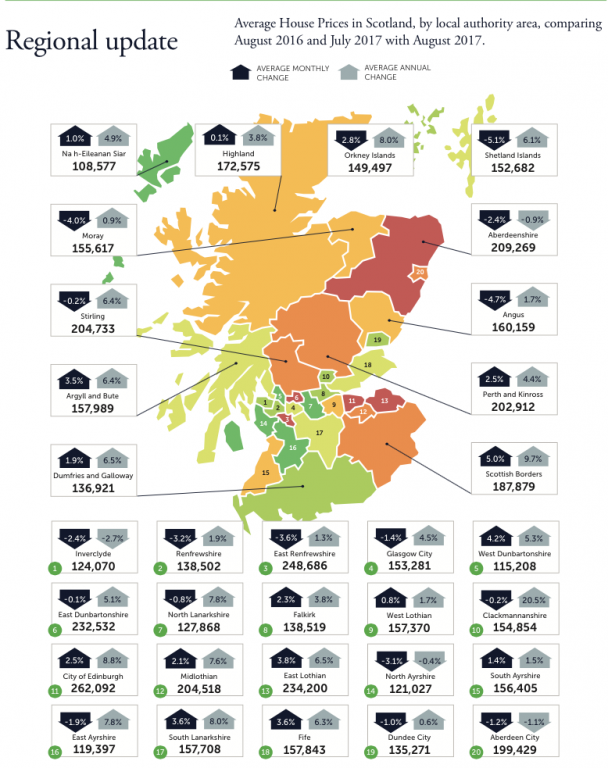 On a monthly basis, Scotland’s local authority areas continue to experience mixed fortunes. Exactly half of the 32 locations in Scotland saw prices rise in August, headed by the Scottish Borders, where the average value was up by 5%, to reach £187,879. West Dunbartonshire, where the average house price is just £115,208, was next, up by 4.2%.

At the other end of the scale, prices in Angus dropped by an average of 4.7%. The Shetland Islands saw a greater decline, of 5.1%, but low transaction volumes there often mean big swings in monthly prices.

Year-on-year, however, there’s much more consistency, with just four areas seeing prices drop. The greatest fall (of 2.7%) was recorded in Inverclyde, following a strong 2016 as a result of sales of new build detached houses.

By contrast, there’s been good growth for a number of areas. Prices rose by 8.8% in the City of Edinburgh – the most expensive location to purchase a property in Scotland, at an average value of £262,092 – while the Scottish Borders saw an average increase of 9.7%. Prices were up by 8% in the Orkney Islands and South Lanarkshire, while Clackmannanshire saw growth of 20.5% – although this again reflects that the area has few sales.

A number of other spots also saw significantly higher than average rises, including North Lanarkshire and East Ayrshire (both up by 7.8%), and Midlothian (up by 7.6%).

Your Move reports that low interest rates and unemployment at a 42-year low are supporting a market that doesn’t suffer from the same affordability problems as London and the South East, which both lower the average in England and Wales.

To date, Scotland has also avoided a slowdown in property sales. May, for which the latest Office for National Statistics (ONS) figures are available, saw 8,241 homes sold in Scotland. That means that, for the first five months of the year, sales were 2% higher than in the same period of 2016 and up by 6% on 2015.

The Managing Director of Your Move Scotland, Christine Campbell, says: “Housing  in Scotland continues to shake off the uncertainty we’re seeing elsewhere in the UK economy. Here, low interest rates, high employment and prices that are still affordable are supporting continued robust growth.”

It may be wise to consider a property purchase north of the border for strong capital growth!