House price growth in UK cities is currently running at an average of 4.9%, supported by high levels of property sales, according to the latest UK Cities House Price Index from Hometrack.

The annual rate of house price growth across the 20 cities included in the index was 4.9% in September – down from 6% in the same month last year. The quarterly rate of growth, however, is at the highest level for 14 months, supported by a nationwide increase in housing sales over the last quarter compared to the previous 12 months.

This unseasonal rise in sales is likely a result of households delaying purchases earlier in the year at the time of the snap General Election.

In September’s index, annual house price growth ranges from -1.8% in Aberdeen to +6.7% in Edinburgh. This is the smallest variation in growth since July 2015 and is a result of a marked slowdown in price inflation across all cities in southern England.

There are five cities where the current level of nominal house price growth is below the rate of consumer price inflation – Aberdeen, Cambridge, Oxford, London and Cardiff.

While most cities are registering house price growth below that of a year ago, there are six cities where the annual rate of inflation is higher, most notably in Scotland. Residential transactions data from HM Revenue & Customs (HMRC) shows that there has been a 20% increase in the monthly run rate of sales over the past quarter in Scotland.

Increased activity has supported an acceleration in the rate of house price growth in the country. Edinburgh is the fastest growing city covered in the index (6.7%), overtaking Manchester (6.5%) and Birmingham (5.9%), where the rate of inflation has moderated slightly.

Glasgow has also recorded a marked rise in the rate of house price growth, from 1.8% a year ago to 5.3% today. While Aberdeen has registered a 15% decline in average prices since 2015, the rate of annual growth has slowed to -1.8% – the lowest level for exactly two years. The annual rate of house price inflation in the capital has stabilised at an average of 2.3%. This is well down, however, on the 8% rate of growth seen since 2010.

Across the markets covered by London, house price growth ranges from +4% in Epping Forest and Gravesham, to -5% in the City of London. There are six markets where house prices are falling in nominal terms, primarily in inner London.

However, low nominal rates of house price growth mean that average property values are currently falling in real terms across 85% of markets in London. Further price declines in real terms are inevitable, as prices re-align to what buyers are willing to pay.

Concerns over Brexit and its impact on jobs and employment are weighing on market sentiment, while low gross yields and a weak outlook for house price growth are impacting the case for property investors. Hometrack expects nominal house price inflation in the capital to remain in the 1-3% range for the next six to 12 months, as volumes contract further.

The firm expects house prices to continue to rise in regional cities, where values are still growing off a low base and affordability remains attractive. The rate of growth is likely to moderate around its current level, tempered by economic and sentiment factors, such as the squeeze on incomes from rising inflation and concern over the economic outlook.

Talk of a potential increase in interest rates, with a knock-on for mortgage rates, is likely to further temper demand.

A modest increase in mortgage rates will initially impact sentiment and levels of market activity, Hometrack believes. Mortgage rates remain low by historic standards and, for the last three years, all homeowners buying with a mortgage have had to prove that they can afford a much higher mortgage rate, of around 7%. Recent sales levels already reflect the ability of buyers to afford higher borrowing costs.

Households are already responding to low mortgage rates, with almost 90% of new mortgages written in the second quarter (Q2) of 2017 taken at fixed rates. Three-fifths of outstanding mortgage balances are also at fixed rates, providing some insulation to any increase in interest rates in the near term.

Higher borrowing costs would also affect demand from investors, who account for around 20% of all housing sales per year. In the face of an increase in borrowing costs, rational investors should either seek property with higher yields, or look to pay less for properties to generate a higher yield.

This means bidding less for housing than they would have if rates stayed low. This would compound the impact of recent tax changes and further moderate investor demand, and, with it, the rate of house price growth in markets where landlords have been most prevalent.

The Founder and CEO of online estate agent eMoov.co.uk, Russell Quirk, comments on the report: “As the final stretch of 2017 comes into view, a late flurry of city-based property transactions has seen a degree of stability return to the market. Due to the generally higher price tag of city living, it is these areas that have been impacted by recent market uncertainty the most and, although growth is still down year-on-year, it will be a promising sign for these homeowners.

“Unfortunately for London, it continues to be last year’s must-have, waning in popularity amongst buyers due to the high price of the capital’s property, while the hottest trend for 2017 is currently tartan, as Edinburgh shows extremely strong growth to overtake Manchester for the top spot.”

He continues: “That said, poor Aberdeen remains the toffee penny in a seasonal box of Quality Streets. Once such a firm favourite, it is now consistently last where demand is concerned, left in the box long into the New Year, chosen by just a few who remember the glory days. Much as tastes for sweets today have shifted, it is unlikely Aberdeen will find any newfound popularity amongst buyers, and it continues to suffer from the decline in the oil industry.

“Despite the overall renewed level of confidence, the market should continue to tread cautiously at least until the year is out. However, growth will remain subdued but consistent across the more affordable options, such as Manchester, Birmingham, Leicester and so on.”

Quirk concludes: “London, along with the other over-inflated cities, such as Oxford and Cambridge, will no doubt continue to struggle due to their much higher price tags, and these areas will be the last to see any meaningful return of buyer demand.” 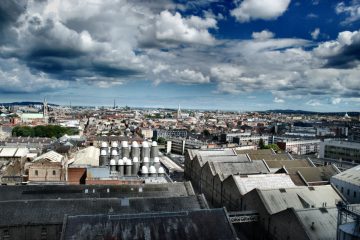 City house price growth is proving resilient, with average values up by 5% in the first half (H1) of this …

City house price growth is proving resilient, with average values up by 5% in the fir...