How Rents have Fared since Crossrail 2 was Announced, as TfL Hints at Decade-Long Delay

Since the Crossrail 2 route was announced in 2013, rents have been pushed up in 13 of the 15 affected local authority areas, according to the latest Rental Index from Landbay, powered by MIAC. However, as Transport for London (TfL) hints at a decade-long delay, how will the property market be affected? 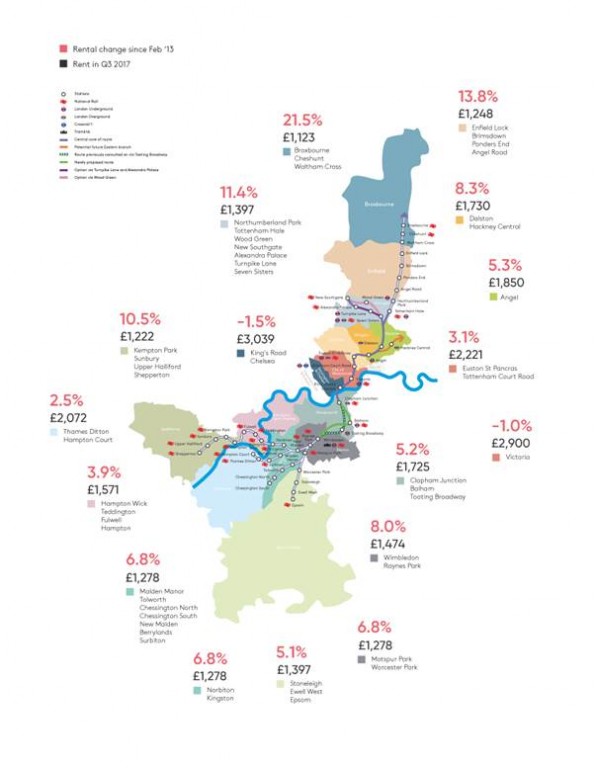 How Rents have Fared since Crossrail 2 was Announced, as TfL Hints at Decade-Long Delay

Last week, a leaked business case from TfL to the Government revealed that Crossrail 2 could be delayed by a decade, as a funding shortfall jeopardises the final go-ahead from ministers.

As the future of the line is called into question, Landbay’s latest Rental Index reveals that a significant uplift in tenant demand in the four-and-a-half years since the route was announced has pushed up rents in 13 of the 15 affected local authorities, and by 21.5% around the north terminus of Broxbourne.

When the route for Crossrail 2 was first revealed in February 2013, rents were falling in seven of the 15 local authority areas set to house the new line. In the year that followed, a dramatic uplift in tenant demand saw rents grow in all but one, Epsom.

Overall, in the four-and-a-half years since the announcement was made, 13 of the 15 local authorities have seen notable rent price rises – most significantly in the north and west extremities of the line, namely Broxbourne (21.5%), Enfield (13.8%), Haringey (11.4%) and Spelthorne (10.5%).

However, while tenant demand indeed grew quickly until 2016, the Government has begun to drag its feet on the final approval of the new infrastructure project, and rents have once again begun to drop – almost across the board. Only Enfield saw rents grow in the past year (by 0.4%), although, by September, rents had fallen here too, by 0.2%. Meanwhile, Broxbourne (-1.75%), Richmond (-1.13%) and Spelthorne (-2.16%) are all showing signs of dwindling tenant demand.

As London rents return to growth in September – after falling for 15 consecutive months – there are signs that demand for rental housing could again be on the rise in the capital, putting further pressure on the Government to follow through on its pledge to release an extra £2 billion of Government cash for local authorities across the UK to build more affordable homes.

The CEO and Founder of Landbay, John Goodall, comments: “The idea of a north/south London railway dates back to the 70s, but it was only in 2013 that we found out where Crossrail 2 would actually run. Planned infrastructure is a key driver of tenant demand, so rents and property prices along the planned line quickly followed suit. But news that the line may now be delayed by a decade is nothing short of a hammer blow to all those that have had the foresight to plan that far ahead.

“What’s needed by tenants, landlords, buyers, business and builders is a clear commitment from the Government that the project will be delivered in 2033 as expected. Not only to help people and businesses plan their lives ahead, but also to allow adequate time for local authorities to plug housing shortfalls before demand spirals out of control.”

He adds: “For example, the latest £2 billion social housing pledge is an encouraging sign that the Government is taking seriously the UK’s housing shortage, but this could and should be linked to the UK’s infrastructure plan, to spare any nasty surprises down the track.”