By Mike Smith, the Senior Director of Companydebt.com

There have recently been a number of news stories about how insolvency procedures, namely the Company Voluntary Arrangement, is being used by struggling high street retailers to reduce the rents they pay, at the expense of commercial landlords. With that in mind, we thought we’d take a look at how the same situation applies to the residential market and explore the powers residential landlords can exercise when faced with bankrupt tenants.

What remedies can be taken against a bankrupt tenant?

Bankruptcy is a last-ditch insolvency measure for individuals who are unable to pay their debts when they become due. That could have led to the accumulation of rental arrears prior to the bankruptcy order being made, and potentially put future rental payments at risk. While a tenant is subject to the bankruptcy procedure, there will be restrictions about the proceedings that can be taken against their property.

Specifically, a creditor with a debt incurred and due for payment before the bankruptcy order was made cannot:

The term ‘property’ in this instance is defined as money, goods, land and the rights and liabilities over property, including a tenancy. So, what can you do? 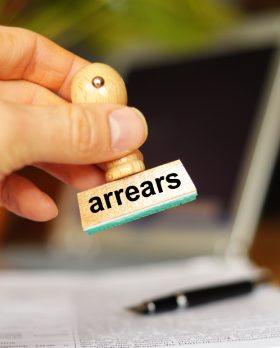 In the case of a bankrupt tenant, if the tenant is able and willing to pay the rent voluntarily, then, as you are a primary creditor, he/she will be allowed to do so, provided they have the means. Only money above their normal living expenses (which includes rent) will be seized.

However, if the tenant is already in arrears and you believe further arrears will be accrued, you may choose to evict the tenant under the Section 21 possession procedure. In that case, the possession order will be mandatory and the bankruptcy will not offer them protection against this.

Alternatively, if the tenant is already in at least two months’ of rent arrears, then you could seek possession of the property using the Section 8 procedure. Previously, there had been a question mark about whether a landlord could use rent arrears as grounds for repossession in a bankruptcy, but that was cleared up in a 2011 ruling that found insolvency would not prevent the judge from making a repossession order.

What happens to the rent arrears?

If a bankrupt tenant has rent arrears, then the action you can take depends on when the debts were accrued.

If the rent arrears have been accrued after the date the bankruptcy order was made, then they are not affected by the bankruptcy. That means the landlord can pursue the debt directly and take recovery action against the tenant, including possession proceedings.

However, before you take any action, it is always wise to do your own research and seek professional advice based on the facts of your specific case.

About the author: Mike Smith is the Senior Director of Companydebt.com and an insolvency expert with 40 years’ experience advising those with commercial and personal debts.