Findings from a new report has revealed that many Britons do not fully understand their right to object to developments of their neighbours’ homes. As a result, this leads to thousands of disputes every year.

According to a questionnaire of 2,000 homeowners from property law specialists Slater and Gordon, the most common disputes between neighbours were over removing or repairing a fence (37%), arguments over boundaries (33%), chopping down trees (30%) and building an extension (18%.)[1]

10% of respondents also said that they had experienced a disagreement with a neighbor over painting the outside of their property.[1]

Alarmingly, 81% of people questioned said they are not completely aware of their legal rights to question changes. Nearly half said they would want to complain to their local council and 10% said that they would take legal action if they were not properly consulted about an alteration to a neighbouring home.[1]

On the other hand, one in ten people said they would not even talk to their neighbor before making a change to their own property. When questioned, 48% said that difficult property language put them off discussing changes, with 54% unsure over the legal process should a challenge arise. 47% said that they did not know who to talk to if they were unhappy.[1]

Head of Residential Property at Slater and Gordon, Samantha Blackburn, said, ‘I’m not surprised that so many people don’t know what to do if they are unhappy about changes their neighbours are making to their home.’[1]

‘It’s always preferable to be able to resolve minor issues, such as replacing a fence or cutting down a tree, informally. However, when it comes to major changes to a neighbouring home, or disputes over boundaries, it may be necessary to contact your local authority and in some cases take legal advice,’ she continued.[1]

Blackburn went on to say,’ however, when it comes to major changes to a neighbouring home, or disputes over boundaries, it may be necessary to contact your local authority and in some cases take legal advice.’[1]

In addition, the research revealed that 19% of homeowners expect their neighbours to talk with them over a new garden structure, such as a shed or a greenhouse. 60% said they expected contact over plants or trees that overgrew the boundary between homes.[1]

Concerns were expressed about neighbouring building projects blocking out the light into gardens and homes, with nearly two-thirds of people asked saying that this was their primary concer. Five in eight people said that they would expect at least a conversation over issues that could affect their boundaries, with 43% saying that they would like to discuss access rights for their own home.[1]

The biggest priority for a huge 94% of people however was simply to get on with their neighbours. With this said, only 25% said that they consider their neighbour a friend.[1] 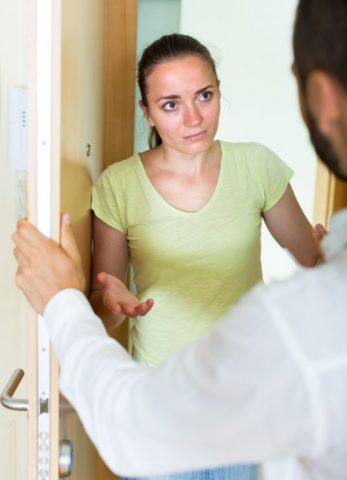 Blackburn commented that, ‘the best way to resolve issues between neighbours is to try to avoid having them in the first place so I always advise my clients to be friendly and respectful towards their neighbours.’ [1]

‘Of course in some cases, such as with fences, overhanging trees, shared gardens or rights of access, homeowners will need to speak to one another about how to rectify certain problems. In my experience as a property lawyer, I have found the best way forward in these situations is to keep the channels of communication open. However, if neighbours cannot agree on how to resolve these issues it may be necessary to take legal advice,’ she continued.[1]

Additionally, Blackburn said that, ‘many homeowners still don’t know much about their rights when it comes to opposing local development or even their neighbour’s plans to add to or alter their homes.  would advise anyone concerned about any of these issues to contact their local authority in the first instance and ask for advice from a planning perspective. Often it’s as simple as lodging your opposition and outlining the reasons for this. It won’t always stop the change, but you can take the opportunity to ask your local authority for further information about what is planned, timescales and whether the change will be discussed at an upcoming council meeting.’[1]

Concluding, Blackburn stated, ‘I would also advise that they liaise with their lawyer who should be able to do some research and look at the title to the neighbouring property and see if there is anything in those title documents that means the proposed alteration needed consent from anyone before it took place.’[1]