London homes have risen in value by a huge £105 a day over the past five years, while salaries in the capital have grown by just 54p per day, shows new research. 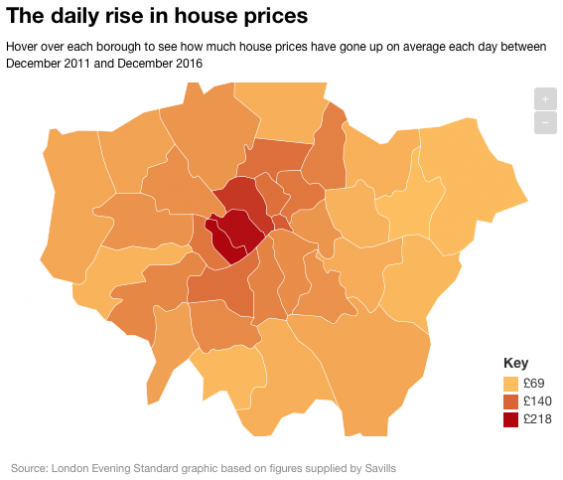 The study found that, despite recession blues and political and economic uncertainty, London homes have comfortably outpaced growth in salaries, pushing the gap between average incomes and average house prices to its widest point ever.

This means that the majority of property owners in the capital have almost certainly earned less than their homes since 2011.

Frances Clacy, the Research Analyst at Savills, says: “The £105 per day increase in house prices over the past five years means the average home has earned £38,325 a year, against the average pre-tax salary of £34,531.”

And, she points out, once tax has been taken into account, the gap between average incomes and property prices only widens further.

The study found that the two boroughs where London homes have grown fastest, in cash terms, are Westminster and Kensington and Chelsea – by more than £200 per day since 2011. Prices in more than half of the capital’s boroughs have risen by more than £100 a day over the last five years.

Even in Barking and Dagenham – the worst performing borough – property values have risen by an average of £69 per day.

The research includes a graphic illustration that proves just how difficult it is for Londoners to get onto the property ladder, particularly since, in the same period, rent prices have soared by 23%, making it increasingly harder for generation rent to save for a deposit for their own homes.