Halifax compiled its data from its own lending, and found that property prices in Greenwich, southeast London rose by around 25%.

Officials have concerns over another housing bubble developing.

The Government believes that the Bank of England (BoE) has the tools it needs to avoid this issue.

Halifax also announced that the average price of a UK home is now £209,428, however, other lenders and official sources say differently.

Nine of the ten areas with the highest growths are in London, according to the Halifax.

The only area in the top ten that is not within London is Crawley, West Sussex.

Out of southern England, properties in Sheffield saw the biggest surges, with a 13.7% increase.

Mortgage Director at Halifax, Craig McKinlay, says: “Continuing improvements in the economy, rising employment, and low mortgage rates will no doubt have supported housing demand and, combined with a shortage of homes coming on to the market, will have contributed to rising property values.

At the opposite end of the scale, towns and cities in the north of England, the West Midlands, Wales, and Scotland have seen drops.

McKinlay continues: “Several of the towns experiencing price falls in the past year are still suffering from relatively weak employment conditions, which may have had an adverse impact on their local housing markets.”1

Recently, Business Secretary Vince Cable described property prices as “getting out of control.”1

BoE governor Mark Carney also stressed to MPs in September that “we do need to be vigilant”1 on house prices.

Chancellor George Osborne has also noted that the BoE does have the power to prevent a boom and bust in the property sector.

Recent figures imply that rises in house prices have been slowing down in the last few months.2

The Royal Institute of Chartered Surveyors expects property prices to increase by an average of 3% in 2015, with no rises in London.

The UK housing market is beginning to stir from its slumber, according to new research from the Council of Mortgage … 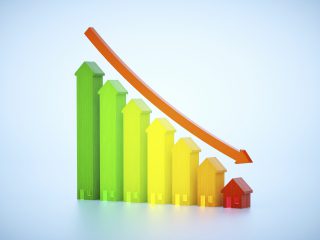 Property sales in the UK dropped in January, falling by 6% compared to last year, however, estate agents’ opinions on …

The UK housing market is beginning to stir from its slumber, according to new researc...

Property sales in the UK dropped in January, falling by 6% compared to last year, how...