Flood Re is Wasting Homeowners’ Money

The Government scheme Flood Re, introduced to make home insurance more affordable for those living in areas at risk of flooding, is wasting homeowners’ money, experts claim.

The system covers insurance premiums for properties on flood plains, using a £180m tax on all other families’ home insurance.

The Committee on Climate Change (CCC) was created to advise the Government, and has stated that the costs of Flood Re are three times greater than its benefits.

However, the Department for Environment, Food and Rural Affairs says that the scheme makes insurance accessible and affordable.

The CCC is hoping the tax on everybody’s premiums will be reduced. Furthermore, it says that cash should be available to prevent flood damage, instead of just when homes need to be cleaned up after a flood. The CCC thinks that Flood Re is too generous.

Around half a million properties will see their insurance capped under the system. However the CCC believes that just 200,000 of these homeowners would actually struggle to afford their insurance without the assistance.

Flood Re is Wasting Homeowners’ Money

The CCC says that the cost of Flood Re does not correspond to ordinary Government spending rules, as it offers negative value for money.

Sir John Krebs, chair of the CCC’s adaptation sub-committee, explains: “Flood Re is set to subsidise many hundreds of thousands of households more than the estimated number that might struggle to afford cover in the free market. This makes Flood Re needlessly expensive.”

Sir John has called for the scheme to be reduced and the emphasis changed: “Managing flood risk will always be the best way of securing affordable insurance in the long term. A transition should be achieved by helping high-risk homes become more resilient.

“There is a risk that Flood Re will be counter-productive to the long-term management of flood risk in the UK, as it largely removes the financial incentive for households to take steps to avoid being flooded. As a consequence, the industry levy funding the scheme could spiral.”1

He has also advised managers of the scheme to properly explain to homeowners that they must restore their property to a more resilient state if they do get flooded.

Ministers and the Association of British Insurers (ABI) introduced Flood Re in June 2013.

The scheme was not supposed to make a profit, but the CCC says that insurers benefit from it because their own risk has been reduced.

The Environment Agency predicts that more properties will be at risk of flooding in the future.

The CCC says that Flood Re should be raising awareness, as many of those living in high-risk homes do not know they are living on flood plains.

Read more about the regulations surrounding Flood Re here. 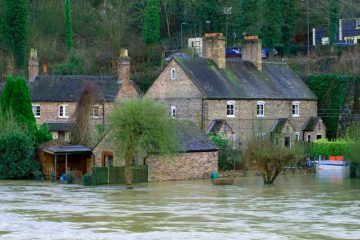 After the recent extreme weather in northern England, many property owners will be worried about their insurance – how high …

Lack of Flexibility in the Regulations for Flood Re

The British Property Federation (BPF) has raised apprehensions over the lack of flexibility in the regulations for Flood Re, the …

After the recent extreme weather in northern England, many property owners will be wo...

Lack of Flexibility in the Regulations for Flood Re

The British Property Federation (BPF) has raised apprehensions over the lack of flexi...