Homes costing £1m per year to rent are experiencing growing demand as those wealthy enough to live in prime properties are worried about mansion tax and Stamp Duty.

Two large penthouses were rented in Mayfair, London in 2010, and since, the £1m rental market has seen a boost.

This select sector has since expanded over the capital and into areas such as Knightsbridge, Chelsea, South Kensington, Notting Hill, Regent’s Park, and Holland Park.

In London’s uber-prime lettings industry, the average weekly rent is now £3,500 per week or £182,000 a year. This is a 23% increase on five years ago, and is more than the average house price in England and Wales.1

Around Central London, the rental sector has had the highest rate of growth for over three years. The average rent paid in the third quarter (Q3) of 2014 was 6.5% more than the previous year.1

It is also believed that the amount of people looking to rent these luxury properties, rather than buy them, could rise even higher. Wealthy Londoners are moving into the rental sector due to a lack of high-end homes and worries over the general election, says a report from Beauchamp Estates and Dataloft.

Managing Director of Beauchamp, Gary Hersham, currently has a six-bedroom mansion on offer, situated next door to the Qatari Royal Family on Cornwall Terrace, overlooking Regent’s Park and known as the most expensive terrace in the world.

Hersham says: “Concerns over a change of government, the mansion tax debate and now Stamp Duty changes have led high net worth individuals to decide to rent for the next 12 months and delay purchase plans. This might cost a client up to £1m, but this is less than a £25-£100m outlay for an ultra-prime property.

“Whilst the ultra-prime lettings market has boomed during 2014, the equivalent sales sector has been affected by the uncertainty in the market caused by the pending general election and the issues over the mansion tax.”1

Another agency, Rokstone Properties, has a Mayfair home to let for £576,000 per year. Found on Audley Street, Westminster, the property has eight bedrooms.

Managing Director of Rokstone, Becky Fatemi, explains: “Prime Central London’s ultra-prime lettings market, properties for rent for over £20,000 per month or more, has only truly emerged over the last 12 months and has really taken off over the last four months.

“Traditionally, clients owning luxury residences in projects such as One Hyde Park, The Knightsbridge, 10 Soho Square, and Trevor Square would not have chosen or needed to rent, preferring to leave their properties empty, enabling them to effectively remain brand new.

“The tenants are celebrities, overseas royals, corporate rents and people looking to buy but deciding to wait until after the election.

“Currently, lettings demand is exceeding lettings supply and the number of sales instructions on the market is also down. This is resulting in lettings values going up, and also sales values going up as there are simply not enough properties in either sector available to meet demand at present.”1

Russell Simpson estate agents is offering The Court House in Chelsea for £600,000 a year.

Head of lettings at the firm, Lottie Henniker-Major, says there is a dip in available properties, which is causing a rise in prices: “There is a distinct shortage of stock in the upper end of the market, with no new properties having come on to the market in the £7,000 per week plus price bracket in 2015 so far. I can only predict that this will lead to a further increase in rental prices moving forward.”1 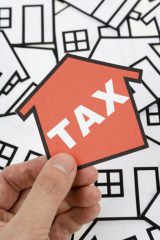 Homeowners hit by the proposed mansion tax will have to spend £110m revaluing their properties, according to Savills estate agents. …

Last year, 160 families saw their property’s value rise to £1m or more due to mounting house prices in the …

Homeowners hit by the proposed mansion tax will have to spend £110m revaluing their ...

Last year, 160 families saw their property’s value rise to £1m or more due to moun...

Ed Miliband’s mansion tax plans have been in turmoil after Labour revealed homeowne...