The Bank of England (BoE) has kept interest rates on hold, despite fears surrounding inflation, according to minutes from its meeting yesterday.

The Bank has warned households to expect interest rates to rise over the next year, but also predicted that living standards will be squeezed by higher inflation and sluggish wage growth.

The BoE’s rate-setting committee voted by six to two to leave official borrowing costs at their all-time low of 0.25%.

New economic forecasts released by the Bank at the same time cut the outlook for UK GDP growth this year and next, and painted a weaker picture for earnings growth. However, the Bank appeared to send a clear message that businesses and households should not expect borrowing costs to stay at their record low for much longer.

The meeting minutes noted that if the economic picture evolved as the Bank is predicting, interest rates could be raised by more than financial markets are currently pricing in. Those market expectations are for two rises to 0.5%, then to 0.75% over the next three years.

The minutes said: “If the economy were to follow a path broadly consistent with the August central projection, then monetary policy could need to be tightened by a somewhat greater extent over the forecast period than the path implied by the yield curve underlying the August projections. 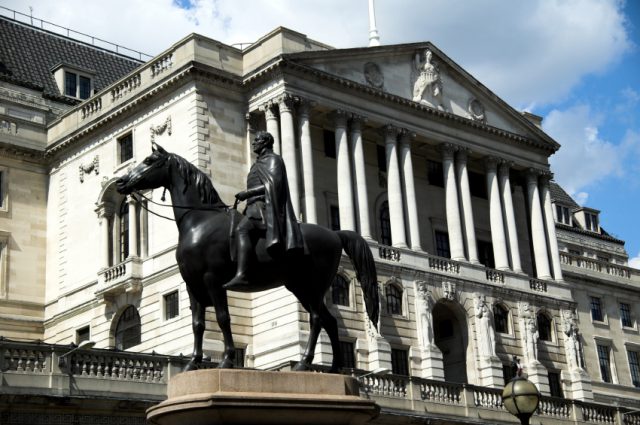 “All members agreed that any increases in Bank rate would be expected to be at a gradual pace and to a limited extent.”

The decision to leave interest rates unchanged was as the vast majority of City economists had expected. However, some analysts had seen a small chance of a rate rise this week, following comments from the Bank’s Governor, Mark Carney, and other committee members that they were more open to higher rates to keep inflation in check.

Price pressures have risen since the vote to leave the EU last year knocked the pound sharply lower, thereby increasing the cost of imports to the UK. The Bank warned that this currency effect on inflation would continue to play out over coming years.

Two members of the Monetary Policy Committee (MPC), Ian McCafferty and Michael Saunders, wanted to put rates back to 0.5% immediately to curb inflation.

The Government set the BoE an inflation target of 2%, but the rate is currently above this, at 2.6%, with policymakers expecting it to pick up and peak around 3% in the autumn on the consumer price index (CPI).

But the other six members of the MPC felt it was better to wait before reversing the emergency cut it made to borrowing costs in the aftermath of last June’s Brexit vote.

Outlining the two sides of the debate over a rate rise, the minutes said: “There were arguments in favour of a moderate tightening in monetary policy now. CPI inflation was substantially above the target, and was projected to remain above the target throughout the three-year forecast period.”

On those wanting to hold rates, they added: “There were also arguments in favour of leaving the policy rate unchanged. GDP growth had been sluggish and was expected to remain so in the near-term. With some business survey expectations balances having weakened, there remained the possibility of a further softening in activity.”

The Director of chartered surveyor e.surv, Richard Sexton, comments on the decision: “One year on from the MPC’s historic rate cut, and the BoE has decided to keep the base rate at 0.25%. However, with the current political and economic uncertainty, it is not a question of if, but when will, rates eventually rise. It’s interesting to consider that for many current mortgage holders, they have never experienced a rate rise and the impact of any payment shock is unknowable at this time.

“Low interest rates coupled with rising house prices have led to borrowers struggling to save deposits and, instead, many are having to borrow larger amounts of money to get onto the housing ladder. e.surv’s latest Mortgage Monitor shows that June was the fifth successive month where large deposit borrowers accounted for less than 35% of the overall market. With more people taking on larger loans, an interest rate rise will be felt first in this segment of the market.”

Ishaan Malhi, the CEO and Founder of online mortgage broker Trussle, has also reacted to the news: “The BoE’s decision to hold interest rates has direct implications for every household, positive and negative. For existing homeowners, sustained low interest rates are good news because they keep mortgage repayments level. In this situation, we’d recommend borrowers review their mortgage to check if they’re on the right deal, should switch to a more competitive fixed rate deal, or even begin making overpayments to bring down their overall debt burden.

“Taking the time to review your mortgage is essential, especially as an estimated two million mortgage borrowers in the UK are on Standard Variable Rates, overpaying an average of £4,900 per year compared to a market leading deal. For those saving for a deposit, sustained low interest rates are bad news, since their savings will continue to grow slowly. The glimmer of hope, particularly for first time buyers, is that housing prices have begun to slow, making some areas that were previously unaffordable more accessible.”

Concerning new forecasts indicate that buy-to-let investors face having to pay an extra £6,700 on their mortgage, when new rules …