The Average Property Price Across the Night Tube Lines

The Night Tube has finally arrived in London! With services set to commence on the Central and Victoria lines tonight, eMoov.co.uk has revealed the average property price across the network.

The Tube will run past midnight tonight (Friday 19th August) for the first time on the Central and Victoria lines, with the Northern, Jubilee and Piccadilly lines set to follow in the autumn.

Online estate agent eMoov has taken a look at the average property price across the two lines due to open tonight, as well as the increase in value over the last year and the hottest locations for housing demand.

The average house price across both the Central and Victoria Night Tube lines is £883,690 – around £300,000 more than the London average.

However, the average house price along the Central Night Tube line comes in just shy of this, at £858,034, while the Victoria line is the more expensive of the two, at an average of £939,812.

Unsurprisingly, the Zone 1 stations across the lines dominate the top ten most expensive stops. At a whopping £2.5m, Marble Arch is the most expensive Tube stop across the new service, with Bond Street (£2.3m), Holland Park (£2.3m) and Notting Hill Gate (£2.3m) also exceeding the £2m mark.

Although the general price of London property is high, there are still a number of affordable options for those hoping to take advantage of the new Night Tube service.

Despite boasting the highest average price, the Central line is also home to the majority of the top ten cheapest stops.

However, the Victoria line hosts the cheapest station, with an average house price of just £347,389 at Tottenham Hale. Blackhorse Road and Walthamstow Central (both at £435,906) are the only other Victoria line entries in the most affordable stations, in ninth and tenth place. 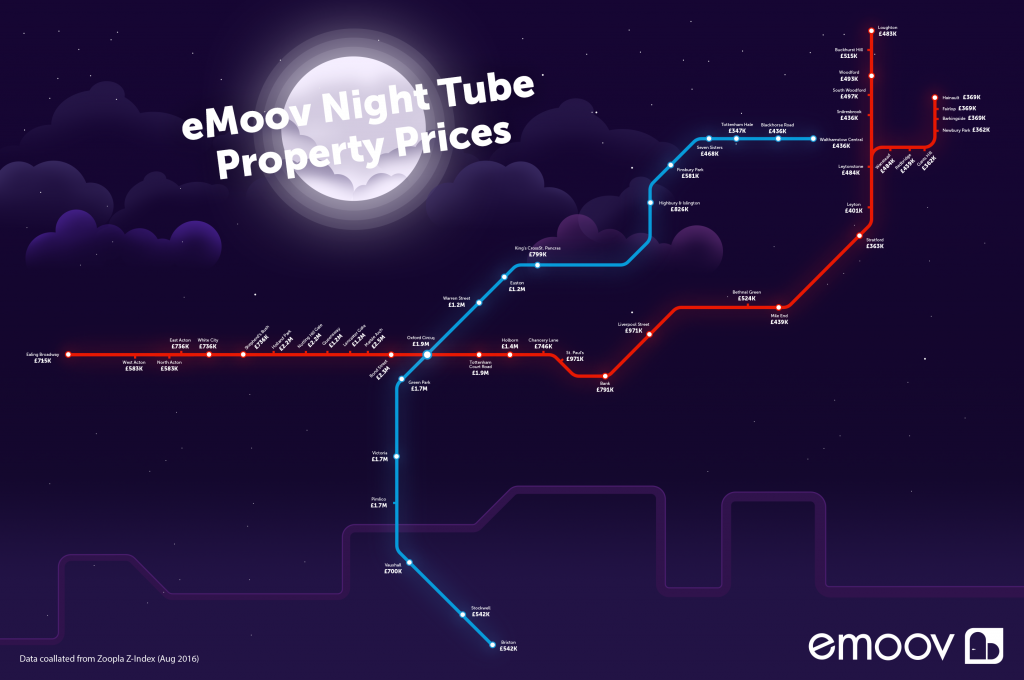 The Average Property Price Across the Night Tube Lines

Property prices along the Central and Victoria Night Tube lines have increased by an average of 3% in the past year.

Warren Street and Euston, both on the Victoria line, have enjoyed the greatest price rises in the last year, of 8%.

Property demand across the two Night Tube lines is currently at 25% – just 3% below the rest of the Underground network.

Tottenham Hale is currently the most in demand area across the initial Night Tube service, with property demand at 56%. The Victoria line also accounts for the fourth and fifth hottest Tube stops, with Blackhorse Road (48%) and Seven Sisters (46%).

However, the majority of the most in demand stations on the Night Tube network are located along the Central line.

The founder and CEO of eMoov, Russell Quirk, says: “In London in particular, property close by to a good transport link, such as an Underground station, will always command more where price is concerned. In fact, transport links have almost become an additional feature of the property itself and a great bargaining chip during the house selling process.

“The introduction of the Night Tube service should only help boost the value of the properties surrounding stations due to benefit from the service. The great thing about the Underground and the night service itself is that you don’t have to live centrally to benefit; you can live out in Zone 4 or beyond and still benefit, not only from the Night Tube, but the cheaper cost of property.”

He explains: “Take the likes of Barkingside for example. It is situated on the Central line, has one of the lowest average house prices on the initial Night Tube network, but is also the seventh highest level of demand, and as a result, has enjoyed one of the largest price increases over the last year.

“The average property in Gants Hill will only set you back just over £360,000, but has also seen the third largest value increase across the Central and Victoria lines. Even Loughton out in Zone 6 is a promising prospect for homebuyers, with demand at 45% and price seeing a 5% increase in the last 12 months.”

Landlords, if you’re looking to take advantage of high tenant demand across the Night Tube network, consider one of the great value locations uncovered by eMoov.