Will 2017 be the Year the London Property Bubble Finally Bursts?

A Times survey of leading economists has predicted that 2017 will be the year that the London property bubble finally bursts, almost a decade after the last market crash.

The worrying report prompted online estate agent eMoov.co.uk to analyse the loss in value a similar London property bubble burst would have on house prices across the capital, as well as elsewhere in the UK.

With house prices once again reaching a dangerously inflated level, eMoov looked at the decline in values between the end of 2007 and beginning of 2009 (21 months), when the last property bubble burst, across each region of the UK, before applying that percentage decrease to the current average house price in each area, highlighting the loss that property owners could experience if the London property bubble bursts again this year.

The UK as a whole 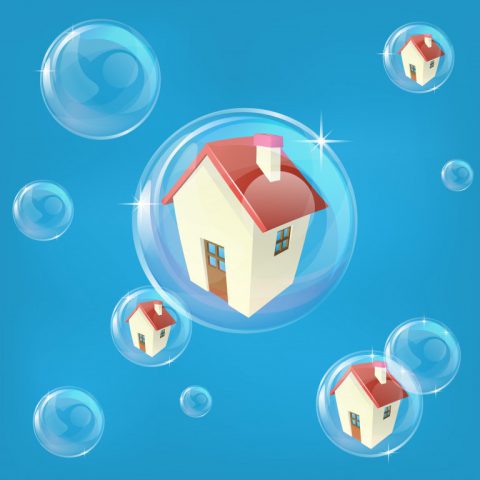 Will the 2017 be the Year the London Property Bubble Finally Bursts?

Of course, it’s the capital where property owners stand to lose the largest sum should the property bubble burst this year.

During the last market crash, those with properties in London saw their assets depreciate by an average of 16.3% (-£48,421). However, since then, the average house price in the capital has soared to £481,648. Therefore, the same percentage decrease would result in a loss of £78,267 today, taking the average value down to £403,381.

Although Londoners suffered the greatest monetary loss following the last crash, the capital didn’t see the largest percentage decreases during the last collapse.

Although a burst in the property bubble this year would mean a smaller monetary loss than in London, these property owners would still face a substantial hit. The lowest would be felt in the East Midlands (-£29,656), taking the average house price down to £146,868, climbing to a decline of £55,146 in the South East, where the loss would bring the average property value down to £258,188.

North of the border

While the ripple effect of the 2007 crash did reach north of the border, property owners in Scotland saw the smallest depreciation across the UK, at -7.4% (-£10,000).

When the last property bubble burst, Wales experienced the third lowest drop in house prices, behind the North East and Scotland. However, the 15% decline still caused £22,348 to be wiped off the average property value of £148,565.

The property market in Wales has struggled ever since, with the current average house price failing to reach the peak of 2007, at just £146,742.

As a result, it is the only region where a crash in 2017 would actually result in a lower monetary loss for property owners than in the previous crash. A 15% decrease today would see £22,011 taken off the value of the typical property, resulting in an average house price of £124,731.

The Founder and CEO of eMoov, Russell Quirk, comments: “Although the UK property market as a whole is faring very well, there are signs that the London market, particularly the prime central end, is running out of steam heading into 2017.

“Even so, it is unlikely that we will witness a market crash as monumental as the one we experienced a decade ago, so homeowners should rest assured that this research acts as a warning of what the worst case scenario might look like, with London homeowners losing £858 a week in property value.”

He cautions: “However, it is a warning nonetheless, and one that the majority of homeowners should heed. A turbulent year for the property market has seen many buyers and sellers back off from their sale or purchase, and baton down the hatches to wait out the storm.

“Whilst the market itself remains resolute, it will inevitably stutter to a halt without the buyer-seller activity it needs to operate. Those considering a sale now would be wise to act before it’s too late, as a reduction in asking price of a few hundred pounds in the current market climate is a lot easier to stomach than a loss of up to £80,000 a year or so down the line, should the market crash.”

Do you think that the London property bubble could burst this year?