Save-to-buy renters can save up to £210 per month for a deposit by flatsharing, according to a new report by Rightmove.

Newcastle was found to be the city offering most value, with a two-bed flat just 11% more expensive than a one-bed.

Average asking rents were found to have increased in all regions during 2015. This was particularly felt in the East of England, where rental increases were higher than anywhere else in Britain. Rents here rose by 6.5%, compared to 0.5% in London.

Rightmove also hinted at a strong start to 2016, announcing that page views for both sellings and lettings increased by 22% over the Christmas period, in comparison to 2014. Renters in Bristol, Birmingham and Manchester were most likely to put down their mince pies to look at the site.

The traditional seasonal fall in quarter four couldn’t prevent all regions ending 2015 with an annual rise in rental costs. However, Rightmove believe that flatsharing is the answer to a number of tenants’ financial problems.

In Newcastle, a typical one-bed flat sets a renter back £553 per month, with an average two-bed costing just £614. This indicates a possible saving of £246 per month, should a renter choose a two-bed with a housemate.

‘The potential saving of renting and sharing a two-bed rather than a one-bed flat is before factoring in reduced costs from splitting the bills,’ noted Sam Mitchell, Rightmove’s Head of Lettings. ‘It could be a good option for renters looking to save up for a deposit to buy or other financial commitment. The Government has various well-publicised initiatives to encourage the home-ownership that some tenants would love to achieve and while sharing can have its pitfalls it is a potentially lucrative solution.’[1]

Neighbouring Gateshead offers the second best value for a two-bed flat in comparison to a one-bed, with the difference being 11.3%. In Swindon, a two-bed flat is 16.9% more expensive, in Bracknell 18.7% and in Milton Keynes 20.5%. 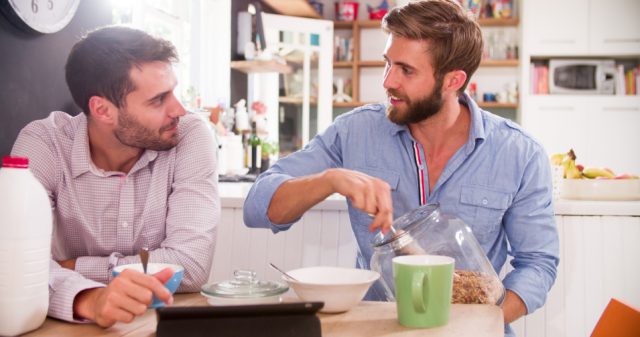 Mitchell went on to say, ‘demand from tenants is at an all-time high and the amount of properties available to rent hasn’t been keeping pace. This has led to more people considering house sharing, a trend that is already very common in London and now growing in other areas. Rather than look at house shares or studios, tenants could team up with friends and look at bigger flats in some of these best value areas, they just need to make sure they’re aware of their legal obligations when signing a joint tenancy agreement. For those that want to buy but are struggling to save a deposit this could help speed up the savings process.’[1]

Concluding, Mitchell observed that, ‘after a 7.8% annual rise in London asking rents last year, a slowing of the rate of growth was due as more and more tenants found their affordability stretched. Outside of the capital last year rents rose by just 0.3%, so this year’s 3.8% could be a result of more professional renters moving into areas outside of London, to sought-after cities like Bristol and Birmingham. Looking ahead to 2016, it’s likely there will be an initial injection of supply onto the market as investors rush to complete purchases before the stamp duty change in April, so renters thinking about moving could find they have a better choice early in the year. From April onwards, we could see a restriction in supply which could feed through into even higher rents. [1]